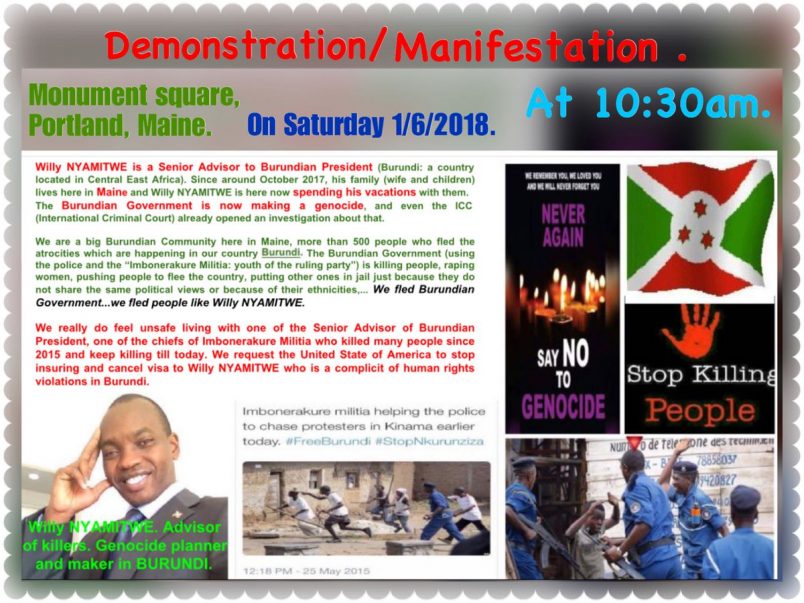 Burundi’s record on human rights came under scrutiny again at the weekend, as presidential advisor Willy Nyamitwe was met Saturday by a band of diasporan protesters during a visit to the United States.

Nyamitwe, the top aide and highly visible spokesman for Pierre Nkurunziza, was visiting his family in Portland, Maine. Local media reports say his wife and three children are living in the area and may be seeking asylum in the U.S. There are about 1,000 Burundians living there, many of whom say they are upset by Nyamitwe’s visits because they fled the small central African nation in fear for their lives.

Nyamitwe scoffed at the protests with “amused surprise,” ridiculing the roughly 30 people who braved the bitter cold to protest in a town square, and then accused the organizers of being part of a violent and racist group banned by Nkurunziza’s government.

In his press release, Nyamitwe again denied any genocide in a nation that has seen political and ethnically inspired violence since Nkurunziza’s bid for an unconstitutional third term in 2015. An International Criminal Court investigation of alleged atrocities was launched in November.

“While I recognize the right of everyone to express themselves by available legal means, I would like to take this opportunity to draw the attention of the opinion that the claims made on a “Genocide being committed by the Government of Burundi” is yet an umpteenth baseless and shameful fabrication,” said Nyamitwe. “It is on the record that no genocide is going on across Burundi as people go by with their business on a daily basis.”

He then accused the protesters of seeking asylum in the U.S. under false pretenses, suggesting there are no human rights violations. “It’s now clear that those individuals are now exposed as the arguments used in their asylum applications are dwindling down one by one because they are baseless and packaged in lies,” he added.

Nyamitwe frequently denies human rights violations in Burundi, and has attacked international NGOs seeking to investigate or raise awareness about those claims. Nkurunziza has refused access to United Nations experts, and earlier this year his nation withdrew its status as a party to the ICC.