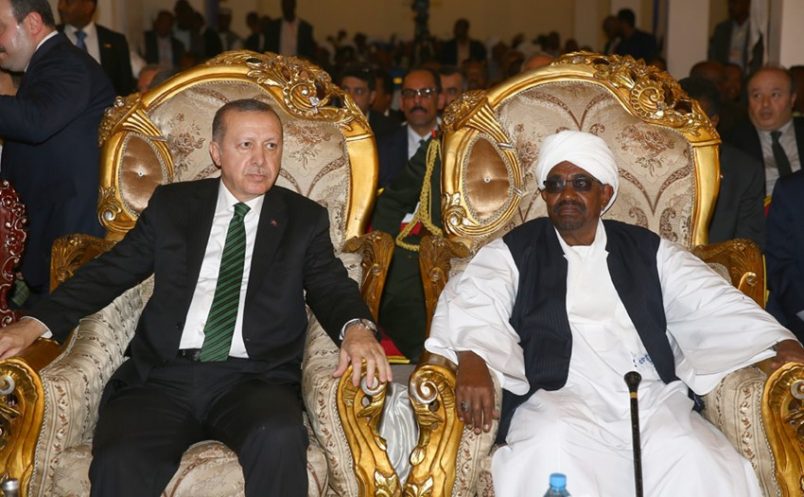 Tensions in the Horn of Africa are drawing attention to the border between Sudan and Eritrea, raising new concerns – and not a little complexity – about regional instability, and the diplomatic and security touchpoints that have implications extending across the Middle East.

Sudan announced a border closure in Kassala state on Saturday, amid reports that thousands of its government Rapid Support Forces (RSF) fighters were deployed to the Eritrean border. The Sudanese government said the closure comes amid security efforts targeting human traffickers, as well as illegal flows of weapons and drugs. The border closure follows a state of emergency declaration from Sudanese President Omar al-Bashir affecting Kassala and North Kurdufan regions made last week.

Officials in Khartoum say they’re concerned about a wave of refugees because of “internal Eritrean developments,” the Sudan Tribune reports, while there’s also speculation that concerns over Ethiopian fighters at the Sudanese border – and a long history of Ethiopian-Eritrean clashes – sparked the move.

The border closure, however, comes just days after Qatari media said Egyptian troops backed by the United Arab Emirates were on the ground in Eritrea – a development that Yemane Meskel, the Minister of Information for Asmara, flatly denied as “false and preposterous” news of a “phantom deployment.”

On the one hand, the claim that Egyptian troops have arrived in Eritrea is getting a hearing in Iranian media too, despite Sudan’s denial of any new diplomatic strain with their neighbor to the east. That’s not surprising given the alliances of Tehran, now facing its own greatest domestic tensions in years. On the other hand, there’s been no affirmation from Egypt or the UAE, there’s no evidence of an Egyptian military presence confirmed by independent observers, and as yet, no accounts of confrontations.

What seems clear amid the confusion is that the deteriorating relationships between Sudan, Egypt and Ethiopia – already strained over, among other things, Ethiopia’s dam construction and Nile River water rights – have been further disrupted by Turkey’s efforts to extend its influence on the African continent. Those efforts, though, occur in a region under the long shadow of a Gulf crisis centered on Qatar that places Egypt among African nations aligned with the Emirates and Saudi Arabia, and Turkey with Doha.

The island, long neglected and fallen into disrepair, sits on a shipping channel south of Port Sudan. While Erdoğan praised Suakin’s heritage and its economic potential for tourism, he also plans to build a naval dock on the key maritime route and has negotiated new military cooperation agreements with al-Bashir.

That’s not welcome news in Cairo, which has been at odds with Erdoğan since the fall of former president Mohamed Morsi in July 2013. Turkey’s Ministry of Foreign Affairs still refers to the military’s removal of Morsi as a coup, even as both governments express their hopes to improve relations but without seeing much progress. Little has changed for Morsi either, who despite Turkey’s diplomatic efforts recently had a three-year sentence for insulting the judiciary handed down on top of the life imprisonment he currently serves.

On Thursday, Sudan’s Ministry of Foreign Affairs confirmed that Abdul Mahmoud Abdul Haleem, the Sudanese ambassador to Egypt, was recalled from Cairo for consultations. Although no information was released about the reason, Egyptian lawmakers subsequently condemned Sudan, again, for allegedly claiming an “occupation” of its land in the disputed Hala’ib Triangle, also on the Red Sea to the north of Suakin. Egyptian MPs say they plan a formal complaint to the United Nations over the renewed territorial spat.

Yet observers also note that Egypt was quick to condemn Sudan for the Suakin agreement with Turkey. There also are suspicions among Qatar’s foes that Doha is behind Turkey’s move to develop the island, just as there have been Egyptian media reports accusing Qatar of funding Ethiopia’s Renaissance Dam plans. Ethiopia denied the latter claim in November, adding that the dam under construction falls within the sphere of national sovereignty and that “Ethiopia, while utilizing its natural resources, doesn’t need to get permission from any other country.” It was another provocation in the eyes of a frustrated Egypt, which has accused Qatar of influencing Sudanese and Ethiopian media over the dam issue and accused Ethiopia of intentionally triggering conflict between Egypt and Sudan.

Meanwhile, there’s no clarity yet on why there’s a military buildup on Sudan’s border with Eritrea or if Egypt has in fact sent troops there. Whatever is happening in Eritrea, which ironically until June was home to Qatari peacekeeping troops before their sudden Gulf-crisis-related pullout, it’s critical to consider the layers of competing influence in the region and the volatility caused by multiple issues – Erdoğan’s unwelcome new stake on the Red Sea, the unresolved Ethiopian dam tensions, the renewed fight over the Hala’ib Triangle, even Qatar’s bold new wave of diplomatic visits to the African continent. Turkey may have triggered a strong response, but Suakin isn’t the only reason for diplomatic tensions with the potential to further upset the fragile region, especially with scarce resources in dispute.