Home>News>Afwerki speaks on Horn affairs, denies Egypt's troops are in Eritrea
By AT editor - 15 January 2018 at 5:01 am 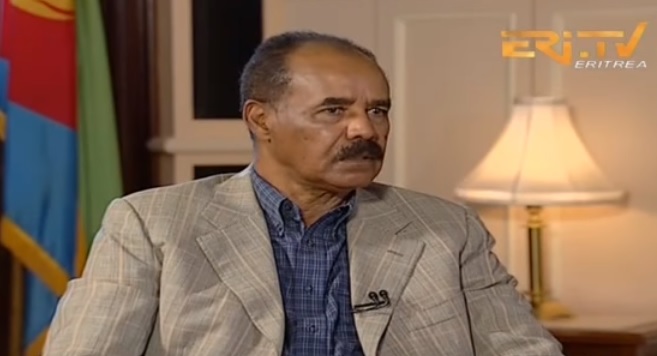 President Isaias Afwerki denied the presence of any Egyptian troops in Eritrea on Sunday, amid heightened regional tensions that have led Sudan to deploy additional troops on its side of the border.

Afwerki’s remarks came during a broadcast interview with state media Eri-TV and Radio Dimtsi Hafash. He called the reports of any Egyptian troops on Eritrean soil “fake news” and blamed foreign media for perpetuating the story.

The Minister of Information, Yemane Meskel, previously denied accounts that Cairo had sent troops to the Horn of Africa nation in recent weeks, which have seen diplomatic relations among Sudan, Egypt, Ethiopia and Eritrea stressed over regional developments. The issues include ongoing negotiations over Nile River water rights as Ethiopia moves forward with its USD $4.8 billion Grand Ethiopian Renaissance Dam (GERD) project, and the Suakin Island deal between Sudan and Turkey.

Afwerki said President Recep Tayyip Erdoğan needs to make his intensions clear as he widens a Red Sea presence, including a naval site, as part of a $650 million agreement with Khartoum.

Afwerki, who visited Cairo last week, stressed the importance of regional stability and Eritrea’s commitment to neighbors including Somalia, but condemned interference by Ethiopia and international actors including the United States.

The Eritrean president is casting a wary eye on any Sudanese alliance with Ethiopia as well, despite the fact that both of those countries are caught up in conflict over the dam project’s impacts on water resources. Sudanese Minister of Foreign Affairs Ibrahim Ghandour met with his Ethiopian counterpart, also on Sunday.