Home>News>MONUSCO: Six dead in Congolese protests against Kabila government
By AT editor - 22 January 2018 at 4:31 am 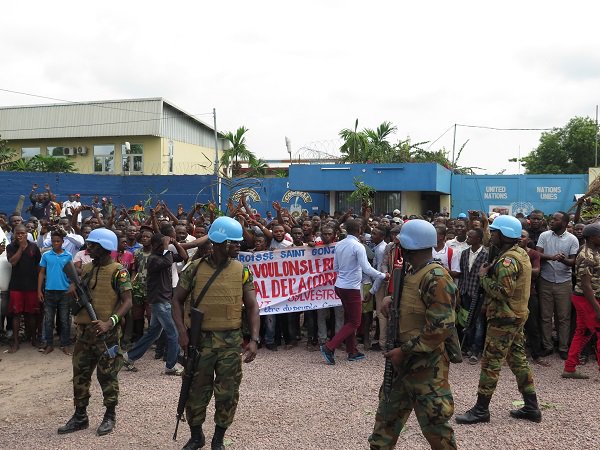 Florence Marchal, a spokeswoman for the United Nations mission there, told MONUSCO-affiliated Radio Okapi that there also were 57 wounded and more than 100 arrested in clashes marked by what she described as excessive use of force against the protesters.

“Some of our field observers have been threatened and harmed in Kinshasa, in the Gombe and Lemba neighborhoods,” Marchal said. “Journalists have also been arrested.”

Congolese police said there were two deaths reported, one each in Kintambo and Lemba.

Comité Laïc de Coordination (CLC), the organizers of what was planned as a peaceful march, said Friday that the march would go on despite a lack of cooperation from local officials. MONUSCO said Friday it was sending observers to Kinshasa and other cities where marches were planned but stressed it was not responsible for maintaining public order.

The march followed a November 2017 appeal from National Episcopal Conference of Congo (CENCO) bishops, involved in DR Congo’s political negotiations, for Kabila to schedule a long-delayed new election and publicly declare he will not seek a third term.

Maman Sidikou, the UN special representative and head of MONUSCO, also pressed for the proper execution of the stalled December 2016 agreement between Kabila’s government and the Rassemblement opposition, as called for by the Catholic bishops.

At least eight people died and dozens were wounded during a similar march on December 31, when security forces used tear gas, beatings and live ammunition against protesters who, in some cases, were at worship in their churches.