Home>Commentary>In Egypt, another blow as Sisi challengers bow out of presidential race
By Laureen Fagan - 29 January 2018 at 5:35 am 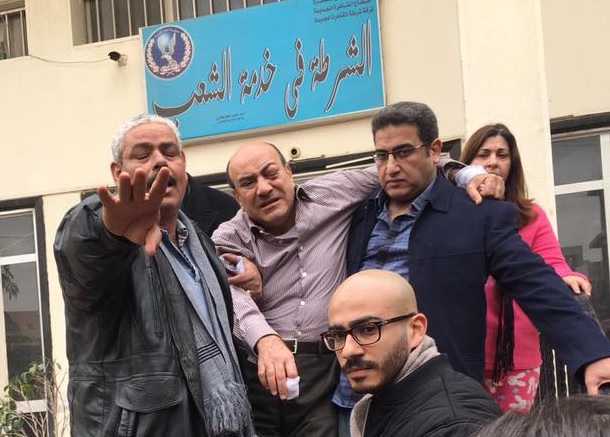 As yet it’s still unclear exactly what happened to Egyptian politician Hisham Geneina on Saturday, but the country’s opposition leaders say it’s another attempt at intimidation by President Abdel-Fattah El-Sisi as he pushes for a second term.

Widely circulated images of the former auditor, who served a brief jail sentence last year after reporting disputed figures about the cost of the country’s corruption, show head and leg injuries that his lawyers say come from an assassination attempt.

Geneina was on the way to an appeals hearing over his auditor job removal when he was attacked and later held at the police station without treatment, said lawyer Ali Taha. “They were trying to kill him,” said his wife, Wafaa Kedieh, in a Reuters interview.

By Sunday, Egyptian prosecutors confirmed they had released Geneina but detained three other people pending an investigation. Yet they said in their statement that his injuries stemmed from a street fight sparked by Geneina’s attempt to flee the scene of a motor vehicle accident in New Cairo.

The incident might seem unremarkable if not for the fact that Geneina – already targeted as an anti-corruption advocate – was named as running mate and top aide to Sami Anan, who announced his presidential candidacy just a week ago but was arrested Tuesday and is under investigation on a range of charges. They include forgery of election documents and incitement against the armed forces.

So the scenario has raised suspicion about the Geneina attack and has been met with anger by Egyptian National Front, an opposition coalition across a broad political spectrum that has called for a boycott of the elections as – one by one – any Sisi contenders are arrested, threatened or withdraw from Egypt’s contest.

“The attempt to assassinate advisor Hisham Geneina should not go unnoticed today,” the coalition said, adding that the repressive authority in Egypt continues to shock the world with daily crimes. “After the series of kidnapping and forced disappearances, the candidates go (from bad to worse) by trying to assassinate dissidents in broad daylight.”

Anan’s arrest and an alarming pattern

While the Egyptian National Front claims and those of Geneina’s legal team may seem overwrought and steeped in partisanship, there’s no overstatement about the context in which they occur. Sisi announced on January 19 that he’ll seek a second term in first-round voting that’s set for late March, and in a country where dissent has been met with his iron fist, there’s reason for the international community to question what’s been happening to candidates willing to challenge him rather than cozy up to him. That’s been true on Egypt’s ever-darkening human rights record for quite some time.

In Anan’s case, it took just three days after announcing his run on January 20 before he was detained, on the grounds that he did not properly separate from active military service that prevents him from running for the elected office under Egyptian law. That’s not sitting well with human rights observers.

“The arrest of Sami Anan is another brazen attack on the rights of the Egyptian people to freedom of expression and political participation,” said Najia Bounaim, North Africa Campaigns Director at Amnesty International, in a statement last week. “It appears that Sami Anan has been detained because he was widely considered to be a serious contender … . This is not the first time such a contender has been prevented from running against the incumbent.”

‘Opportunity for hope’ is gone

Last November, former Armed Forces Colonel Ahmed Konsowa announced his candidacy in a YouTube video and posted the information on a Facebook page that no longer exists.  On December 3, less than a week after his announcement – as was the case with Anan – Konsowa was detained, rushed through a military trial and sentenced to six years in prison for “disobeying military orders by expressing his political views” and “committing acts that violate military norms by publishing a video on Facebook announcing his plan to run for the presidency.” He remains detained while his case is under appeal.

Ostensibly, the similar argument for barring Konsowa and Anan from running against Sisi stems from the authority of Egypt’s Supreme Council of Armed Forces (SCAF) used to determine their eligibility in what has long been a militarized state. The post-coup constitutional changes of 2014 codified the power to do so while solidifying Sisi’s, and the SCAF effectively screens and endorses any candidates from the ranks – including the refusal to accept necessary resignations from presidential contenders who present a challenge to the chief. The SCAF also continues to exert influence over the decision-making of Egypt’s National Elections Commission.

Yet accounts of intimidation and repression also surround Former Prime Minister Ahmed Shafik, who announced his candidacy at the end of November 2017 and was widely considered to present a popular challenge to Sisi, having narrowly missed a presidential win in 2012. The conflicting reports of his arrest and deportation in the United Arab Emirates, which Shafik publicly denied as a kidnapping, preceded his own withdrawal from the race. “I strongly apologize to every young man who has been detained, simply because of his personal relationship with me or my supporters,” Shafik said in one of his messages.

It’s much the same story for lawyer Khalid Ali, a human rights activist who announced in November his plans to make a presidential run but – after Anan’s arrest – announced on Wednesday his withdrawal from the race. He’s awaiting a March appeal on his own arrest, which would make him ineligible to run.

It’s what Ali said during his press conference that’s cause for concern and most bears repeating: “The opportunity for hope in this presidential election has gone.”