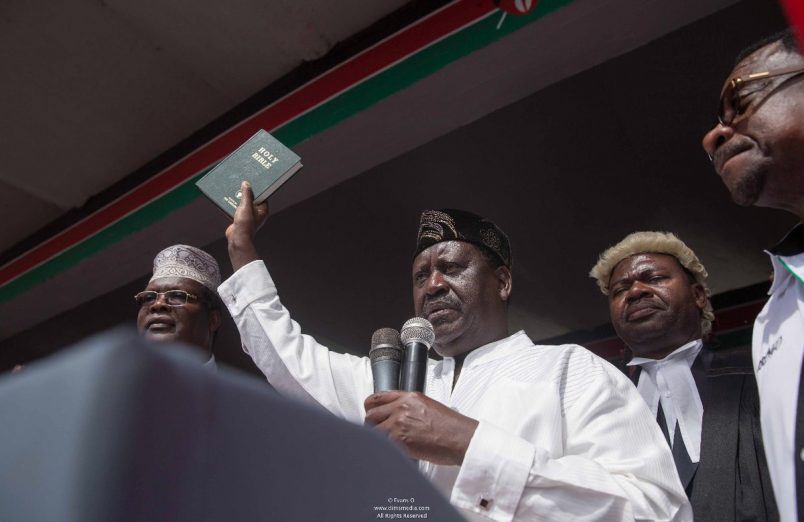 Kenyan opposition leader Raila Odinga’s symbolic swearing-in ceremony in Nairobi is considered “a well- choreographed attempt to subvert or overthrow the legally constituted Government of the Republic of Kenya,” according to a statement released Wednesday.

Interior Minister Fred Matiang’i said full investigations into Odinga and his Nasa “co-conspirators and facilitators” are under way and expected to lead to appropriate legal action. His statement comes amid reports that at least three media outlets, shut down ahead of Odinga’s event in Uhuru Park on Tuesday, remain firmly closed after the government warned broadcasters not to cover the Nasa political rally.

“The Government was and is aware of the role of some elements in the media fraternity who participated in furtherance of this illegal act,” said Matiang’i. “Their complicity would have led to thousands of deaths of innocent Kenyans due to the buildup of the incitement that was witnessed in early hours of the morning of 30th January 2018.”

So far there are no reports of widespread violence, although the home of Odinga’s running mate, Kalonzo Musyoka, was attacked with a grenade and gunshots late Wednesday in what Musyoka said was an assassination attempt. Police used tear gas as Nasa supporters protested the arrest of lawmaker TJ Kajwang, who was reportedly detained for his role in planning the Odinga inauguration ceremony.

Odinga refused to concede a loss to President Uhuru Kenyatta, and said he was honoring the mandate of the August 8 election and the Kenyan people. Kenyatta was re-elected in a second election in October after the initial results, in which Odinga lost, were set aside by the country’s Supreme Court. That decision followed a successful legal case initiated by the opposition, who challenged the legitimacy of the original election but then boycotted the later process.