Home>Finance & Economics>Japan commits USD$700 million to African Development Fund
By AT editor - 15 February 2018 at 2:48 am 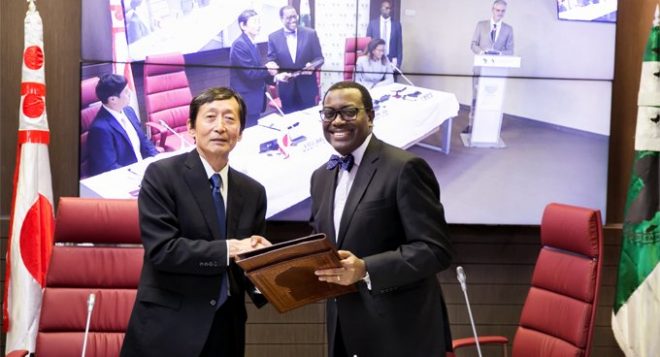 In a first for Japan, the country’s International Cooperation Agency (JICA) has signed a new loan agreement with the African Development Fund to provide USD$700.9 million to address poverty and support economic growth.

“We hope the loans and grants will be used effectively to improve economic and social conditions of less privileged people in Africa,” said Hiroshi Kawamura, Japan’s ambassador to Côte d’Ivoire who was on hand for ceremonies at African Development Bank (AfDB) headquarters in Abidjan.

“Thanks to Japan and its government for keeping a promise,” he said. “One often hears about many international pledges of development cooperation remaining unfilled. I would like to commend the full accomplishment of Japan’s commitments to Africa’s development. With its US $700-million loan, which came on top of US $328 million in the form of a grant, Japan has significantly contributed to the ADF commitment capacity for the period 2017-2019.”

Adesina said Japan is the second-largest contributor to the ADF, in cumulative terms, and has boosted its contributions over time.

The fund provides support primarily to least developed and poor countries in the form of very long-term, low-interest financing; this is the first time since its 1972 launch that concessional loans rather than grant funding alone were opened up as options to donor countries.

In contrast, the African Development Bank, which is the other arm of the AfDB, provides financing to middle-income countries in Africa.