Home>Commentary>Ramaphosa's reset: Don't pour cold water on this moment
By Laureen Fagan - 17 February 2018 at 7:30 am 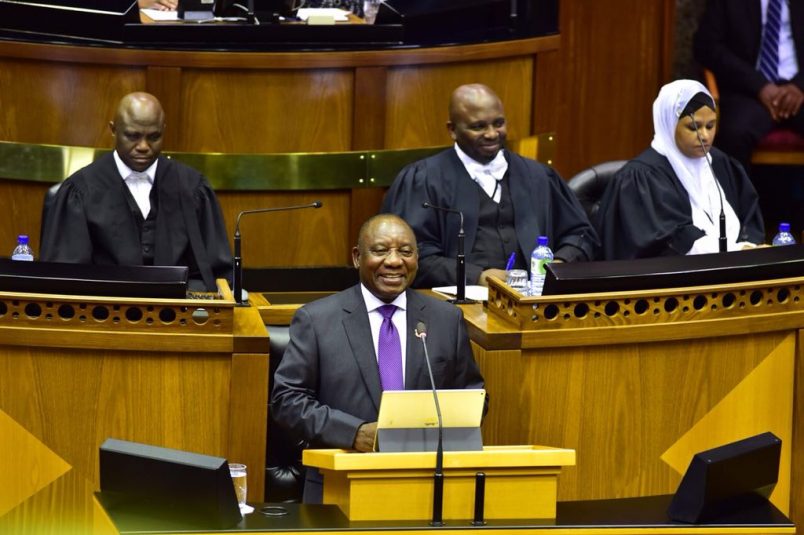 In a State of the Nation speech that included a nod to the late South African musician Hugh Masekela, the country’s President Cyril Ramaphosa promised a new beginning rooted in hope and a chance to move beyond the economic and political crises of recent years.

The spiritual and cultural resonance gave a fitting conclusion to his address and did not go unnoticed – eliciting a bit of banter between Ramaphosa and opposition party leader Julius Malema, whose Economic Freedom Fighters (EFF) were less disruptive and appeared on the unlikely verge of a contagious post-Zuma optimism themselves.

Yet their divisions with Ramaphosa and the African National Congress (ANC) were clear, and the new president’s speech didn’t gloss over the challenges South Africa faces now that former president Jacob Zuma has at last stepped aside.

His resignation Wednesday evening set in motion a fast-track though entirely predictable change in leadership, but not without a fight to the last from a president who had led the nation since 2009 and whose historic contributions to South Africa’s democracy were honored by friend and foe.

Zuma has been at the center of South African corruption investigations that link him to the wealthy Gupta families, their business dealings, and South African state entities including the country’s Eskom utility provider. The president announced only in January that, after lengthy delays and legal maneuvers, he was appointing a commission of inquiry into the corruption allegations raised in the country’s 2016 State of Capture report. He was still stonewalling hours before his televised resignation address, even as South African authorities began making arrests in the Gupta investigation, and made clear in his speech that he chafed at the final ultimatum issued by a deeply divided ANC’s National Executive Committee.

A resolute tone on corruption

With the delayed State of the Nation address set just a day after his swearing-in, Ramiphosa had an unusually defining moment to set the tone for his administration and the agenda for moving forward. While solutions to South Africa’s ailing economy were at the core of a message that began with an extended appeal for unity, Ramaphosa was, as promised, quick to address graft and corruption head on.

“This is the year in which we will turn the tide on corruption in our public institutions,” Ramaphosa said. He promised that the commission of inquiry headed by Deputy Chief Justice Judge Raymond Zondo is soon expected to commence its work on state capture – what South Africans call the undue influence over South African entities and officials by those who can afford it.

“The Commission is critical to ensuring that the extent and nature of state capture is established, that confidence in public institutions is restored and that those who are responsible for any wrongdoing should be identified,” he said as parliament members applauded. “We must fight corruption, we must fight fraud and collusion as well as in the private sector with the same purpose and intensity that we want to find it in the public sector.”

The new president’s address was a welcome message within a frayed and fracturing ANC that Zuma himself said he didn’t want to further split in two. In his response, Secretary General Ace Magashule stressed that the party wants to move ahead under Ramaphosa to engage South Africa’s youth and improve economic participation.

Indeed, most of Ramaphosa’s 80-minute speech was devoted to economic plans, including a national minimum wage plan to be introduced on May 1. Parliament will receive a National Health Insurance bill, he said, that will ensure universal health coverage. The administration will continue the free higher education program for low income households that Zuma announced in December, and South Africa’s business community and investors can expect an improved climate.

Yet corruption remains a dark cloud, and Malema and the strident EFF targeted Magashule too during Ramaphosa’s address with cries of “Ace,” a reference to the ongoing investigation into Magashule’s role in the Gupta-related Vrede Farm case.

While the EFF may be more vocal – they’re on record in calling Ramaphosa’s election illegitimate, and walked out of parliament Thursday – their voices are not the only ones concerned that Ramaphosa’s ANC merely continues business as usual under Zuma with the same political and economic fallout.

“Beyond the fine words of renewal and new found unity, he unfortunately did not fulfill the expectations of the public with a clean break from the Zuma era,” said Mmusi Maimane, leader of the Democratic Alliance. “South Africa needs immediate and total change. Nine years of the Zuma presidency has set our nation back, and unfortunately President Ramaphosa did not show tonight that he is able to bring the total change we desperately require.”

Yet even Malema and Maimane conceded that Ramaphosa’s address reflected a hope that South Africa needs, if not direct solutions. The country has a fresh start, and the new president has a chance to build on it.

“Our task as South Africans is to seize this moment and not to pour cold water on this moment,” Ramaphosa said. It is one of hope and renewal, and deserves support for its best chance of survival.