Home>News>Turkey's Erdogan begins four-nation Africa tour in Algeria
By AT editor - 27 February 2018 at 6:18 am 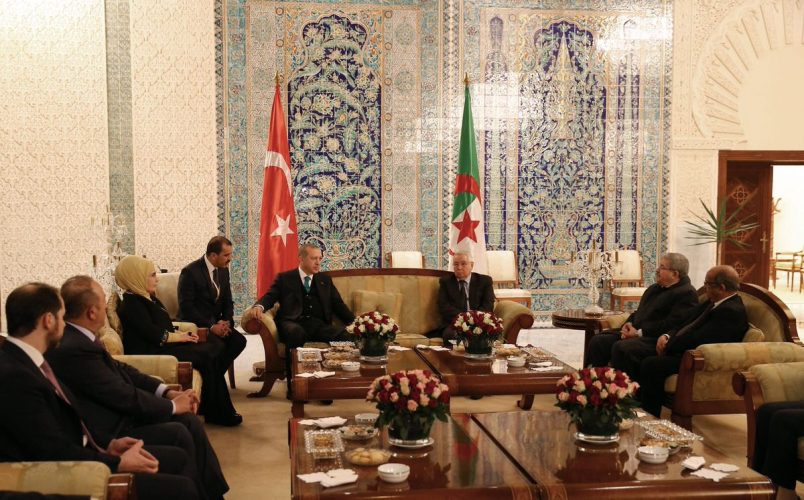 President Recep Tayyip Erdoğan of Turkey began a tour of four African nations on Monday in Algeria, where he met with Prime Minister Ahmed Ouyahia to discuss cooperation on counterterrorism, energy, and economic development and trade.

It is Erdoğan’s second visit to Algeria since becoming president in 2014 and he was expected to meet with President Abdelaziz Bouteflika, despite the latter’s poor health and rare appearances in the public eye. The Turkish president also is traveling with Foreign Minister Mevlüt Çavuşoğlu and a group of investors and business leaders participating in the Turkish-Algerian Business Forum on Tuesday.

Trade between the two nations has reached USD$3.5 billion, and Algeria is one of Turkey’s largest African trading partners, according to Çavuşoğlu. Turkey’s investments in Algeria are comparable, he said.

“After Algeria, President Erdoğan will pay a visit to Mauritania in Sub-Saharan Africa on February 28 and following that visit he will head for Senegal,” his office said. “The last stop of the tour is Mali.”

The visits to the Sahel nations are viewed as historically important because they represent Turkey’s first presidential visits there and reflect Erdoğan’s priority in cultivating influence on the African continent. Before leaving for Algeria, he hosted a meeting Monday with Fayez Al Sarraj, head of the Presidency Council for Libya’s Government of National Accord, which followed a Turkey-Libya investor conference in Istanbul.

A similar business and economic forum is planned for Senegal when Erdoğan arrives there.