Home>News>Small quake surprises Mauritius and La Réunion
By AT editor - 28 February 2018 at 7:37 am 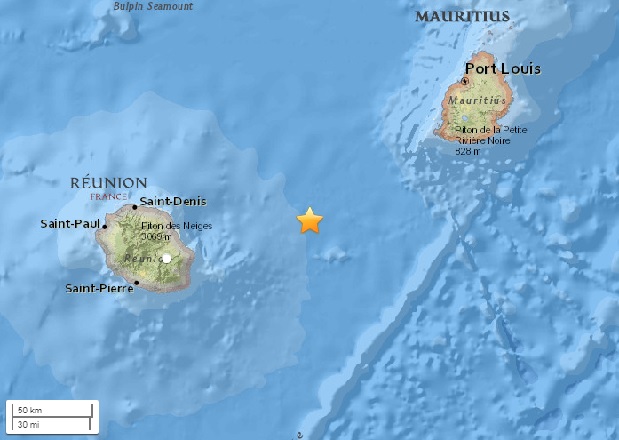 Residents of Mauritius had a mild surprise late Tuesday when a magnitude 4.0 earthquake hit beneath the ocean at 11:25 p.m. local time, striking between the Indian Ocean island and neighboring La Réunion.

There were no reports of serious damage or injuries, but the shaking got a lot of attention among residents and on social media. The epicenter of the quake was 79 kilometers from Sainte-Rose and about 112 kilometers from Tamarin on Mauritius, according to the United States Geological Survey.

The Mauritius Meteorological Services confirmed the earthquake in a special bulletin early Wednesday.

There were 22 citizen reports made to the USGS, most of them from Mauritius. Six people from the Moka region said they felt weak shaking, and another eight people from Vascoas-Phoenix, Quatre Borne and other communities in Plaines Wilhelm said they experienced the earthquake. It was also felt in Grande Riviere Noire.

One person in Quatre Bornes reporting to the European Mediterranean Seismological Centre (EMSC) said it felt as though the earth was sliding horizontally. Another in Grand Baie said that a friend’s house shook for about five seconds, and when they checked the news was lighting up social media.

Small earthquakes are not uncommon in the region, where larger events occasionally occur. They include a 6.0-magnitude earthquake in July 2017, a 5.3-magnitude quake in 2015 and a 5.8-magnitude quake in 2012. The Mauritius Meteorological Services says there is no record of either Mauritius or Rodrigues being severely affected by quake-related tsunamis, although both saw some impacts from the December 2004 disaster and the need for preparedness remains.