Home>News>Africa trip will take U.S. Secretary Tillerson to a troubled Ethiopia
By AT editor - 2 March 2018 at 6:23 am 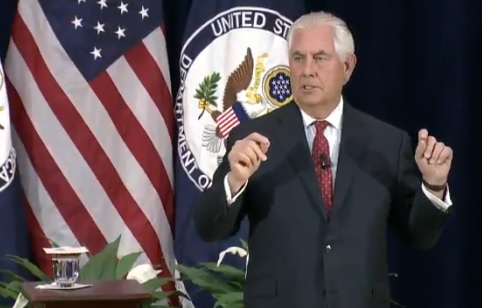 Secretary of State Rex Tillerson of the United States will travel next week to Addis Ababa, where he will meet with the Ethiopian government as well as with leaders of the African Union Commission.

Tillerson’s visit is part of a five-nation tour that begins March 6 and runs through March 13. His other stops include Chad, Djibouti, Kenya and Nigeria.

“In particular, he plans to discuss ways we can work with our partners to counter terrorism, advance peace and security, promote good governance, and spur mutually beneficial trade and investment,” the U.S. Department of State said in a release Thursday. “During his trip, he will also meet with U.S. Embassy personnel and participate in events related to U.S. government-supported activities.”

Tillerson’s visit is meant to advance American partnerships with the governments and people of Africa, and follows on a promise made in January by U.S. President Donald Trump. Trump announced an extended diplomatic visit to Africa in a letter sent to AU member nations, in the wake of reported inappropriate remarks about African immigrants and their home nations that sparked global outrage.

The secretary’s visit to Ethiopia comes at a time of heightened political turmoil in a nation whose leaders announced a state of emergency following the sudden resignation of Prime Minister Hailemariam Desalegn on February 15. The U.S. Embassy in Addis Ababa responded swiftly with concern that a new state of emergency “undermines recent positive steps toward creating a more inclusive political space” and urged Ethiopian officials to reconsider the decision – a move that reportedly touched off diplomatic tensions between the two nations.

Hailemariam’s replacement has not yet been named, but the parliament is returning from recess and is expected on Friday to address the vacancy and vote on the state of emergency.