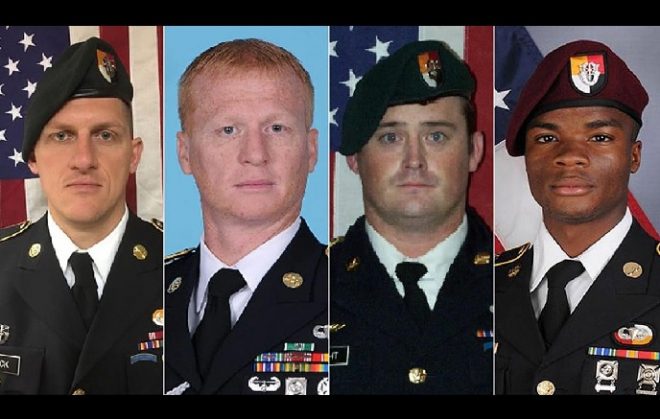 The United States military responded Monday to the weekend release of a propaganda video, reportedly from Islamic State in West Africa, that appeared to show graphic depictions of the deaths of four U.S. personnel who died in Niger in October.

The video shows footage from the body cam of at least one American fatality during the attack, interspersed with images and audio from JNIM (Group for the Support of Islam and Muslims) militants who also claimed responsibility for Friday’s attack in Burkina Faso. It includes a declaration of allegiance  to Islamic State from the previously al-Qaeda affiliated group – JNIM formed in March 2017 – in a development analysts have been tracking since at least mid-February.

“The release of these materials demonstrates the depravity of the enemy we are fighting,” AFRICOM said in a statement. “We encourage the news media to deny ISIS a propaganda success by not purchasing, showing or bringing undue attention to these images as it re-victimizes the affected families, amplifies IS atrocities and aids in their recruiting.”

The four Americans – Staff Sgts. Bryan C. Black, Jeremiah W. Johnson and Dustin M. Wright, and  Sgt. La David Johnson – were ambushed near Tongo Tongo on October 4. Their deaths have sparked a U.S. inquiry into their specific mission in support of Nigerien forces, and broader questions about the military’s role in counterterrorism efforts alongside France and other partners in the Sahel.