Home>In Depth>Attention to African nations in Zeid's Human Rights Council speech
By AT editor - 8 March 2018 at 6:43 am 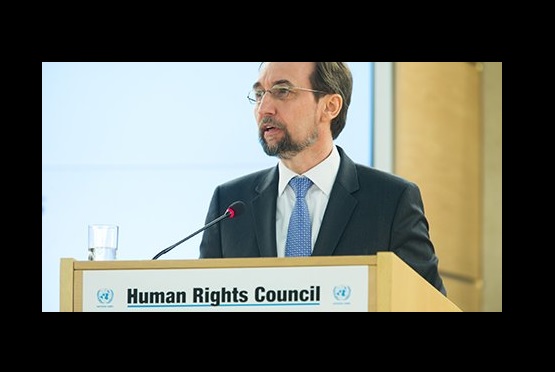 In an annual update to the Human Rights Council in Geneva on Wednesday, UN High Commissioner for Human Rights Zeid Ra’ad Al Hussein noted a list of concerns among African nations – and also a few bright spots.

The human rights chief noted The Gambia’s announcement of a death penalty moratorium last month, and Somalia’s developments, including the establishment of a national human rights commission, as positive news.

Yet in remarks that began with praise for Nelson Mandela, Zeid compared unfavorably those global leaders who fail to honor his legacy in their own leadership. He went on to discuss human rights violations around the world: On Africa, he noted escalating conflict and sharply deteriorating economic and social conditions in a number of states, while praising African Union Commission Chairman Moussa Faki Mahamat for emphasizing the importance of human rights for the future of the continent.

“Economic, social and cultural rights are also being undermined by climate change, which contributes to displacement of people from their land, as well as to conflicts between pastoralists and farmers, in particular across the Sahel and in Nigeria,” he said. “The drastic collapse of oil revenues in several countries of Central Africa has further diminished the authorities’ capacity to respond to basic social needs.”

Below are excerpts of his speech that discuss specific African nations:

Burundi: Gross violations of human rights continue to occur with complete impunity. Since campaigning began for a vote on the Government’s plan to revise the Constitution, new crackdowns have seen many civil society activists, and some remaining political opponents, arrested. Recent threats to my staff in Burundi are completely unacceptable, and I deeply regret the continued suspension of our cooperative assistance. The Council will be briefed on my concerns on 13 March.

Cameroon: What appears to be long-standing structural discrimination in the Anglophone region of the country has led to continuing clashes between security forces and separatist groups. The arrest, in Nigeria, of 47 Anglophone community leaders, and their extradition to Cameroon has reportedly led to renewed violence in the south-west and north-west of the country. Allegations of summary executions of civilians by members of the security forces have been reported, and are generating widespread resentment. I regret that my Office has not been given access to verify these allegations. Acknowledging the complex challenges facing the authorities – including renewed displacement from the Central African Republic and the increase in Boko Haram attacks in the north – I urge the Government to make every effort to de-escalate the conflict in the Anglophone regions, and to allow unimpeded access to human rights monitors so that accurate information on the situation can inform constructive engagement on the way forward.

Central African Republic: The Council will receive a detailed update on the Central African Republic on 21 March. Hope for national reconciliation continues to be undermined by violence committed by armed groups. I urge the authorities to operationalize without further delay the Special Criminal Court, alongside the on-going trials before Assize courts, in order to respond to the people’s calls for justice.

Congo-Brazzaville: I welcome the cease-fire agreement between the Government and armed groups to end the crisis in the Pool region. My Office is discussing with the Government the need for a genuinely independent and effective national commission of inquiry on allegations of serious violations since 2015, as repeatedly recommended by our assessment and follow-up missions.

Democratic Republic of the Congo: I deplore the continued repression of fundamental rights, as well as assaults on churches and religious sites by members of the youth wing of the ruling party. The Government is not creating an environment conducive to free or credible elections. The Council will be fully briefed on 20 March, and my Office will be releasing a detailed report in the coming days.

Egypt: I am concerned by the pervasive climate of intimidation in the context of this month’s Presidential elections. Potential candidates have allegedly been pressured to withdraw, some through arrests. Legislation prevents candidates and supporters from organising rallies. Independent media have been silenced, with over 400 media and NGO websites completely blocked. My Office continues to receive reports pointing to the ongoing targeting of human rights defenders, journalists, civil society activists and supporters of the Muslim Brotherhood, as well as reports of torture in detention. Egyptians have legitimate aspirations to live in a free, inclusive and democratic country, and I urge much greater respect for their fundamental freedoms and rights. I note Egypt’s recent invitations to a number of Special Procedures mandate holders and invite the authorities to engage in discussions with my Office.

Equatorial Guinea: I am deeply concerned about the arrest and detention of more than a hundred leaders and opposition members, in the aftermath of the legislative elections of November 2017, and the failed coup plot which was announced by the Government in January. I urge transparent and comprehensive investigations, and scrupulous respect for due process guarantees.

Eritrea: Despite Eritrea’s increased engagement with the human rights mechanisms, I am concerned about the very serious lack of progress on human rights issues. Eritrea will be the subject of an interactive dialogue on 12 March and an oral update on 14 March.

Ethiopia: I welcome the release of more than 7,000 detainees in January and February, including several high profile figures. I am concerned about the declaration of a second State of Emergency last month. Reforms can only be carried out successfully through truly inclusive dialogue and political processes. I urge the authorities to investigate and prosecute those responsible for recent killings in the country, and I reiterate my request for access to affected regions.

Kenya: I am concerned that recent government actions against the press contravene freedom of the media, a pillar of democracy. I am also concerned by threats against civil society: Kenya’s impressive civil society groups are an inspiration for many, and the current regression is disturbing. There have also been incidents of harassment and arrest of leading opposition figures. I urge respect for the independence of the Kenyan judiciary and encourage the Government to implement the decisions of the courts. It is essential that Kenya ensure accountability for the scores of human rights violations reported during the 2017 elections, including sexual violence and unlawful killings.

Libya: My Office will brief (the Human Rights Council) on Libya on 20 March. During my mission there in October I was alarmed by the near-complete lawlessness throughout the country, with almost total impunity for even the most serious crimes. I encourage all States to support the International Criminal Court’s investigation into crimes against humanity committed in the country.

Mali: I welcome efforts to control the very volatile security situation by the G5 Sahel countries, but it is essential that their coordinated security responses integrate respect for human rights in all operations. I am glad to report that my Office is helping to put in place an appropriate human rights and international humanitarian law compliance framework, developed in the context of the implementation of UN Human Rights Due Diligence Policy. Reported violations of human rights by the national security forces, including allegations of torture, arbitrary arrests and extra-judicial killings, are deeply counterproductive and undermine national cohesion. I urge that a comprehensive strategy be employed to address the root causes of insurgency and extremism, by eliminating conditions and inequalities which lead people to develop grievances.

South Sudan: The Commission on Human Rights in South Sudan has identified more than 40 senior officials who may bear individual responsibility for war crimes and crimes against humanity, and has found evidence of “a clear pattern of ethnic persecution,” for the most part by Government forces. Fighting continues unabated, irrespective of the signature of another ceasefire agreement in December. I am alarmed by the suffering of the civilian population, including the more than 200,000 people who remain in the UNSMISS Protection of Civilian sites, in a clearly unsustainable situation. Government forces pose the single biggest threat to the protection of civilians in the country, followed by opposition armed groups, and I deplore the recent promotion of three South Sudanese Generals who in 2015 were identified by the Security Council Sanctions Committee as responsible for grave human rights violations. Violations committed by the security forces, and the Government’s repression of voices perceived to oppose its views, contravene the Government’s commitments to a National Dialogue, electoral processes, truth-seeking and reconciliation. I applaud the call made by the Chair of the AU for sanctions to be adopted against the main perpetrators of human rights violations in South Sudan, and urge the Government of South Sudan to sign the Memorandum of Understanding for the Hybrid Court without further delay.

Sudan: I am concerned that civilians in Darfur continue to suffer attacks by militias and state security forces – including the Rapid Support Force in which many Janjaweed militia members have been integrated. I am deeply concerned about the plight of 2.5 million displaced people who face continuing violence by both security forces and militias. Since January, my Office has received a new wave of reports of arrests and detentions of human rights defenders, political activists and journalists across the country, following demonstrations for economic and social rights.

Tanzania: I draw this Council’s attention to the deteriorating human rights situation in Tanzania, including heavy-handed restrictions on media freedoms and on civil society, and an increasing number of attacks on, and arrests of, Government critics. The Government has also taken an increasingly repressive approach to important social issues, with arrests of LGBTI activists, growing attacks on the LGBTI community, and attacks and threats against people working to provide reproductive health-care. The Government’s policy of permanently refusing any further education to girls who become pregnant is shocking, and I am disturbed by the High Court’s finding that such a policy is not discriminatory.

Zimbabwe: I encourage the newly formed Government to enact economic reforms to address inequalities and lay the foundations for truly sustainable and inclusive development based on human rights. It is also time to open civic and democratic space in the country, allowing all citizens to participate, associate and express their opinions freely. In this connection, I am concerned about the recent amendments to the Constitution which roll back gains on the independence of the judiciary – a real set-back for reform.

Zeid also spoke about Europe’s response to the migration crisis. “I emphasize that measures which in effect externalize the borders of the European Union put the human rights of migrants at risk, by subcontracting their protection to States with often fewer resources. Support to the Libyan Coast Guard by the EU and some of its member states is one such example,” he said. Zeid urged the EU and its member states to reevaluate their approach, to ensure they are not indirectly supporting the return of migrants to Libya where they face conditions condemned by the global community.

To see his complete remarks, check this link.