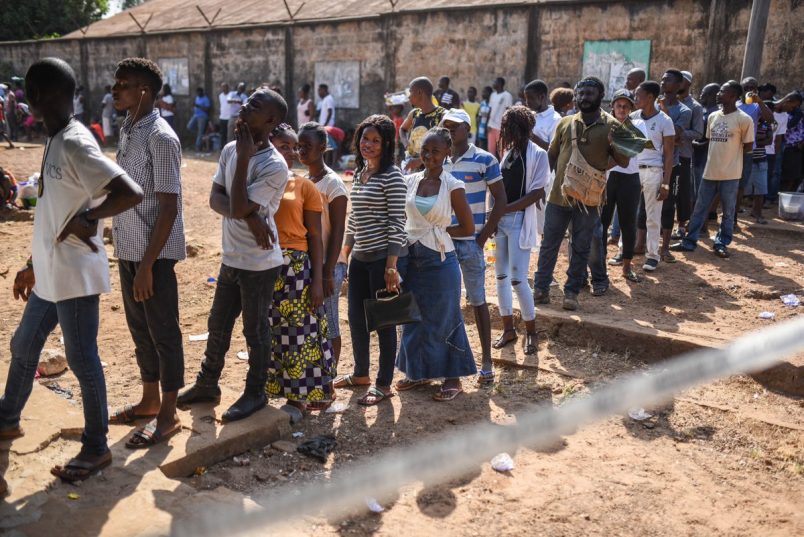 The results released Sunday are part of a progressive process with no final result as yet; each incremental report has reflected a percentage achieved in each of Sierra Leone’s polling stations. Final results were not expected for several days following Wednesday’s election.

“In our five Regional Tally Centres, NEC continues to process election result forms from polling stations,” said Mohamed Conteh, chairman of the National Election Commission. Some irregularities have been identified, and some forms face further examination to ensure the integrity and accuracy of the count.

“In addition to the numerous safeguards already in place, we continue to monitor the tally process at every stage, and have kept our doors open to all political parties, national and international observers, and the media,” he said.

A list of recount districts also was released Sunday by the NEC.

“The NGC is even more convinced now that these irregularities were systemic and widespread,” the coalition said in a release. A list includes tampering with sealed containers, instances of over-voting, inconsistent paperwork signatures and breaches at polling stations. The NGC claims representatives were prevented from monitoring vote counts and removed from polling stations during “scuffles and fracas” that created a climate of fear and intimidation.

There have been few reports of electoral violence as voters choose a replacement for APC President Ernest Bai Koroma, although police descended Wednesday on SLPP headquarters. Supporters briefly clashed with authorities before the situation – reportedly related to computer systems and hacking concerns – was defused.