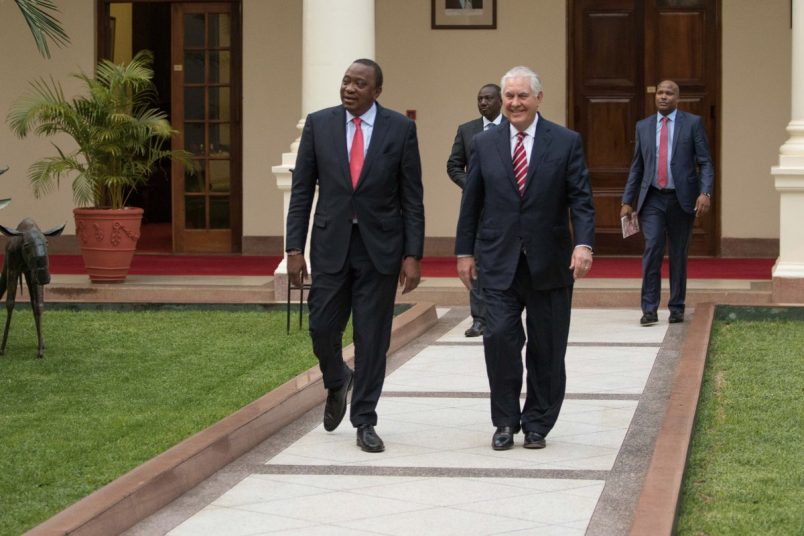 United States Secretary of State Rex Tillerson headed to Chad and Nigeria on Monday, resuming his tour of African nations after briefly falling ill at the weekend while in Kenya.

While in N’Djamena, Tillerson was expected to focus on counterterrorism efforts in West Africa, where Chad plays a key role in the G5 Sahel force.

Tillerson also will meet with high-level Nigerian officials, but will cut short his trip to fly home Monday night to attend to pressing matters; he had been expected to see President Muhammadu Buhari for talks on Tuesday. The U.S. diplomat will discuss security and stability issues, particularly with an eye toward next year’s elections in Nigeria and the ongoing economic challenges as well as the West African nation’s role in counterterrorism.

Tillerson’s trip has taken him to Djibouti and Ethiopia, where he also met with African Union chief Moussa Faki Mahamat. President Uhuru Kenyatta met with Tillerson on Friday, before the U.S. secretary took a day off for an undisclosed illness.

On Sunday, Tillerson attended a memorial ceremony at the site of the 1998 attack on the U.S. Embassy in Nairobi. “Nearly 20 years later, we meet here to honor those who we lost and those who were injured. Hundreds of lives were taken and hundreds if not a thousand more were changed forever,” he said. “Some of our current embassy colleagues who survived this tragedy, including Ambassador Godec and his wife Lori and our current locally employed staff at the embassy that day of the bombing, are with us as well.”

Tillerson has stressed the importance of an engaged and visible U.S. committed to supporting African institutions and development, while cautioning leaders about China’s influence on the continent.