Home>Commentary>The Tillerson farewell: Does U.S. even care about Africa?
By Laureen Fagan - 13 March 2018 at 9:42 pm 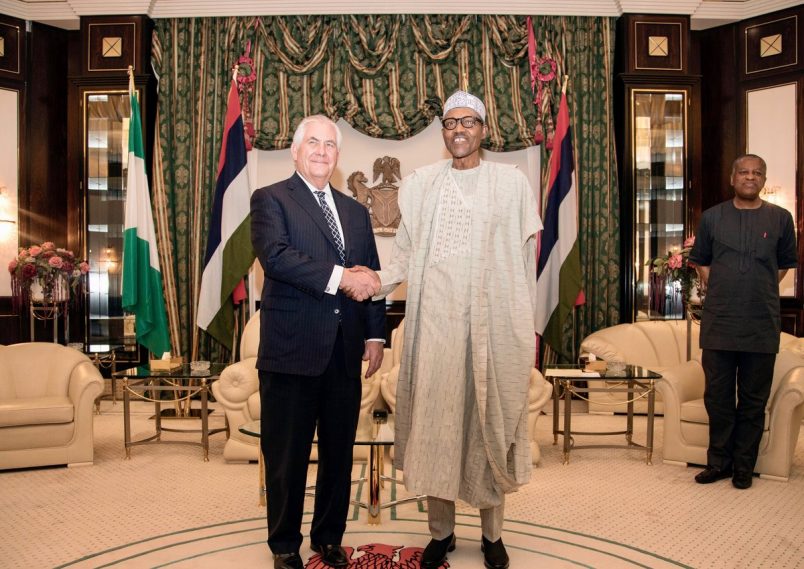 Former United States Secretary of State Rex Tillerson left Nigeria and landed at Andrews Air Force Base in Washington D.C. shortly after 4 a.m. local time on Tuesday. He cut short a high-visibility trip to five African nations, meant to assure African partners that the U.S. is committed to their economic and security interests, and genuinely values diplomatic relationships with their leaders and nations.

At 8:44 a.m., President Donald Trump, as is so often the case, took to Twitter to announce Tillerson had been replaced and his Central Intelligence Agency Director Mike Pompeo would take on the new role. At 2 p.m., Tillerson briefly addressed the media to deliver a terse statement about the transition without taking any questions.

There’s much speculation as to whether Tillerson knew during his African tour that he was about to be fired, with Washington Post writers on one hand saying there was no one more surprised than Tillerson himself, while the New York Times and other outlets noted a veiled warning he received on Friday. Does this explain Tillerson’s Saturday cancellations in Kenya? Is it the reason for cutting short his Abuja stay?

“The Secretary had every intention of staying (in his position), because of critical progress made in national security,” said Steve Goldstein, a spokesman for Tillerson’s own Department of State. The attention turned to the contentious relationship between Trump and Tillerson, the latter’s recent remarks about Russia or what to expect from the hardliner Pompeo. It left little analysis on the questions left in the minds of Africans themselves, on a continent abruptly and unceremoniously left behind in the dust as Tillerson’s flight winged off into the night.

“What does this mean for Africa?” asked a Zimbabwean. Trump “didn’t even allow him the decency of completing his present tour,” a Nigerian said. “OK, we get it, Trump doesn’t give a toss about Africa,” added another from Lagos. “Trump is reducing the influence of the USA,” a Kenyan said. “What exactly is he trying to tell for Americans and the rest of the world about new world order?” asked an Ethiopian.

Whatever the answer to that last question, it’s clear that the Tillerson announcement was disappointing and bewildering, and consequences for the U.S. may prove more serious than the breathtakingly bad optics.

In part, Tillerson’s tour – which included Chad, Djibouti, Ethiopia, Kenya and Nigeria – was meant to repair the U.S. image among Africans deeply offended by Trump’s comments in January. Reports that the U.S. president said African immigrants came from “shithole countries” outraged citizens and their leaders alike; Botswana, notably, asked the U.S. government “to clarify if Botswana is regarded as a ‘shithole’ country.” Ambassador Arikana Chihombori-Quao and the AU Mission to the U.S. expressed their “infuriation, disappointment and outrage.” The AU didn’t stop there, rightly urging the need for dialogue, and Trump responded in a letter to the AU and its members promising Tillerson’s extended visit in March.

There was a great deal of emphasis on that diplomatic row during the former U.S. secretary’s visit, notably during his press availability alongside AU Chairman Moussa Faki Mahamat. “I believe this incident is of the past,” the AU chief said in a translation provided by U.S. officials. Proof that African interests are important to the Americans was “personified” by Tillerson, his presence embodying the evidence of that commitment; their meetings on trade, investment and security were productive, Mahamat said.

What African leaders aren’t saying – but their citizens are – is that the Trump dump adjacent to Tillerson’s visit wasn’t just disrespectful to the former secretary but to Africans themselves. A trip to repair U.S. friendships with African nations looks a sham, creating even more mistrust the Americans can ill afford.

Riding for the brand

Trump’s less-than-decorous firing of Tillerson just adds to perceptions that U.S. leadership is mercurial and its policy commitments unreliable. It follows a litany of Trump decisions that alienated Africans (among others), including the move to back out of the Global Compact on immigration, walk back U.S. Paris Agreement climate obligations, leave UNESCO and slash foreign aid.

For all the focus during Tillerson’s visit on the belated U.S. concern over Chinese influence on the continent – or even the contrast with the simultaneous stay of Russian Foreign Minister Sergey Lavrov in Addis Ababa – it’s hard to understand how the U.S. could again position itself so poorly within the global community, ostensibly while trying to protect its prestige and up its profile on African engagement.

Yet it’s not just China and Russia. India too, and Turkey, Japan, the European Union and the Gulf States all seem to understand how critical the African continent is to the international community and a shared global future. The Trump-Tillerson diplomatic disaster sends a message to Africa, all right, but it further tarnishes the reputation America sought to advance. It comes as U.S. military leaders are underscoring just how critical a stable visibility is, as AFRICOM commander and Marine Corps Gen. Thomas D. Waldhauser did just last week, and proves its own undoing.

It’s not in Tillerson’s nature to do one-on-one interviews, but he did so in February. He described himself by using a metaphor common among cowboys in his native Texas and said he was “riding for the brand.” The expression captured his sense of loyalty to the Trump administration and its goals, even with the internal conflict over North Korea, Iran, climate policy or the future of his own department staff.

Tillerson’s not riding for the brand anymore, but that’s not really the problem. The problem is that Africans, and their confused counterparts around the world, no longer understand what the U.S. brand is. That’s quickly becoming a crisis, and the U.S. better step up its efforts in defining and communicating what that means.