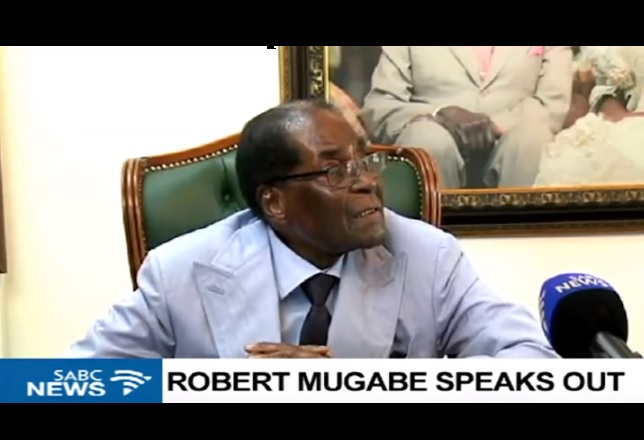 In a dramatic interview with South African television, the former president of Zimbabwe, Robert Mugabe, accused the country’s military of conducting a coup d’etat to remove him from office in November and illegally install current President Emmerson Mnangagwa.

“I never thought he whom I had nurtured and brought into government and whose life I worked so hard in prison to save as he was threatened with hanging, that one day he would be the man who would turn against me,” Mugabe said in an extended interview with state-supported South African Broadcasting Corporation (SABC).

“He was assisted by the army,” said the 94-year-old Mugabe, who said he doesn’t hate Mnangagwa but insisted he would never have assumed office without the assistance of the military, and was never chosen in a democratic process.

“We are topsy turvy.We used to be the pride, not just of Zimbabwe but of all of southern Africa, but we are not that any more. We are a disgrace to ourselves, a disgrace to our community and to Africa. Why did we do this?” Mugabe said.

He went on to insist that Zimbabwe must “undo this disgrace which we have imposed on ourselves.”

Mnangagwa acknowledged Mugabe’s remarks in a statement issued Friday. “The nation has moved on,” he said. “Our focus at this time shall remain on preparing for free, fair and credible elections in 2018.”

Mugabe’s Zanu PF party denied any coup was in progress when Mugabe and his controversial wife, Grace, were placed into military custody last year on November 15. Mugabe refused to resign from office, but ultimately did so on November 21. Mnangagwa’s swearing-in was held on November 24.