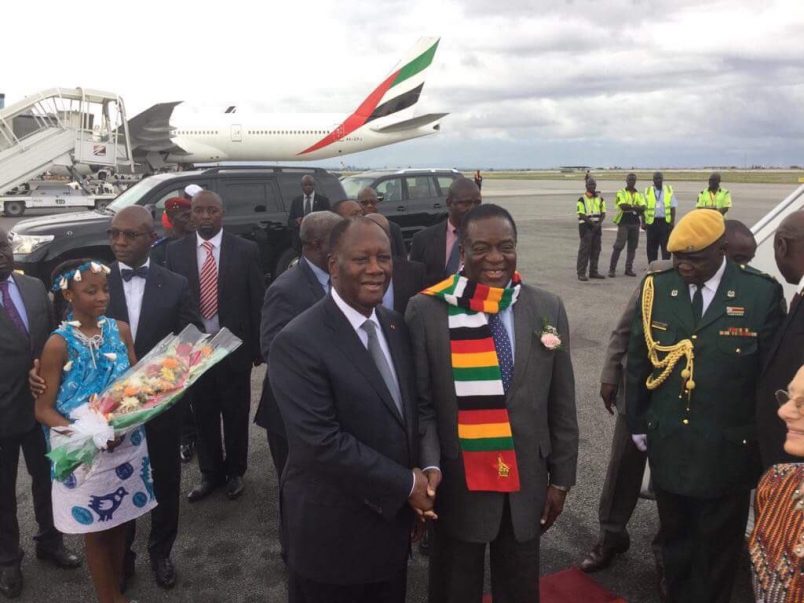 President Emmerson Mnangagwa of Zimbabwe has arrived in Côte d’Ivoire, where he was greeted by President Alassane Ouattara as both head for the Africa CEO Forum to be held Monday in Tuesday in Abidjan.

Mnangagwa will present his plans for economic recovery, and with former Nigerian president Olusegun Obasanjo will participate in a panel discussion on ways to lift the country out of its isolation and get the economy back on its feet.

Mnangagwa replaced former president Robert Mugabe in November 2017, and has promised to rein in corruption and transform the nation into a new Zimbabwe.

“This historic transition has raised the population’s expectations, especially around economic recovery and job creation in a country suffering from widespread unemployment,” said the forum, which is co-hosted by the International Finance Corporation of the World Bank Group.

“Having emerged from a long period of economic isolation, Nigeria offers a solid example on which to base discussions on strategic priorities that must be implemented to revive Zimbabwe’s economy and put an end to sanctions,” the organizers added. A session on doing business in Zimbabwe is planned for Tuesday.

George Weah, the newly elected president of Liberia, also is expected to attend for the first time. He’ll join Ouattara and President Nana Akufo-Addo of Ghana, who are participating along with African Development Bank President Akinwumi Adesina.

Some 1,200 corporate and government leaders are expected to attend the forum. For more details, see the Africa CEO Forum website here.