Home>News>Vote count begins in Egypt as busy last-minute polling closes
By AT editor - 29 March 2018 at 2:44 am 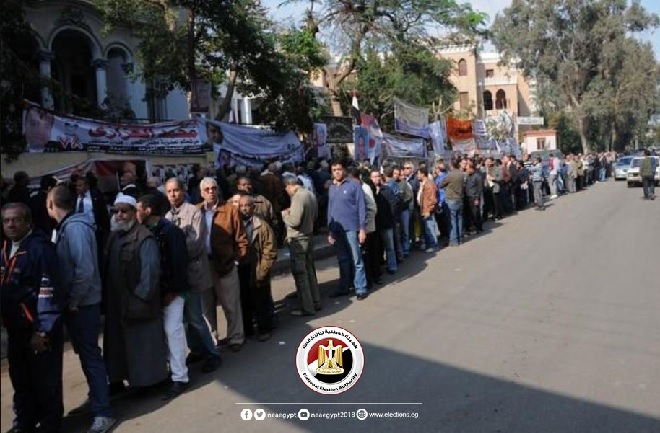 Egypt extended its voting times on Wednesday, the last of three days in the nationwide elections, after lines at the polls swelled following a last-minute announcement by the country’s National Election Authority that registered voters who failed to participate faced a fine.

The directive found in an NEA guidelines publication sent many of Egypt’s 59 million registered voters into long lines, while most reports found participation light on Monday when polls first opened. The USD$28 fine (500 Egyptian pounds) seemed to boost last-minute turnout but meant a later night. Polling stations across Cairo, Giza, Alexandria, and North Sinai were especially busy, the NEA said.

Counting votes in the contest between lone challenger Moussa Mostafa Moussa and President Abdel-Fattah El-Sisi – expected to win an election viewed by many as a foregone conclusion – began as the polls closed, local media outlets said. A final tally is expected from the NEA no later than April 2. In the unlikely event of a runoff, the NEA plans that later election for the end of April.

The election has gone smoothly so far, officials said, with no reports of clashes or violence amid tight security, especially in parts of the country with ongoing security challenges. There are 54 local NGOs with election observation status, and another 15 approved international observers.

Sisi announced his intention to stand for re-elections on January 19, and has campaigned on security issues and the promise to invest in Egyptian science and technology. Yet Egyptian human rights observers say his campaign has relied on arrests and intimidation – the fate of at least three potential challengers, as well as opposition supporters – and less on meaningful policies to improve life for the country’s people.