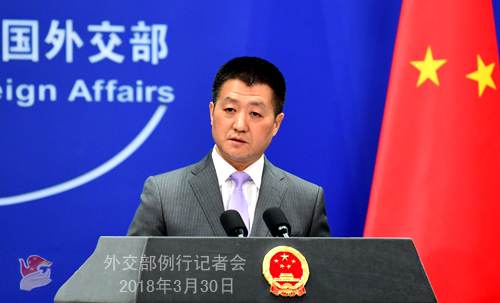 China again defended its record on Africa Friday, this time while taking a volley of questions from reporters during a routine press briefing with Ministry of Foreign Affairs spokesman Lu Kang. It’s the latest round of responses as Beijing has pushed back in recent weeks against comments, primarily from the United States, that bring renewed scrutiny to its investments and relationships on the continent.

This time, Lu confirmed President Emmerson Mnangagwa of Zimbabwe’s visit to Beijing, which begins Monday – but he also was asked about the newly completed Kariba South hydropower expansion, which is expected to add 300 megawatts of power and offset some of the import demand needed to meet Zimbabwe’s average daily threshold of 1,600 megawatts. The USD$533 million hydropower project was built by China’s state-owned Sinohydro, with a $355 million loan from the Export-Import Bank of China.

“The expansion project of Zimbabwe’s Kariba South hydropower station funded and constructed by China is one of the important outcomes of China-Zimbabwe pragmatic cooperation,” Lu said, noting it’s not the only example. “After its completion, the project will play a positive role in increasing Zimbabwe’s power supply and promoting its economic and social development. China is pleased to see this.”

While China may be pleased, others are raising questions – and by no means for the first time – about Beijing’s influence on the continent and at what cost to Africans themselves. The recent announcement from the West African regional body ECOWAS that a new $31.6 million headquarters would be funded, built and maintained for three years by the Chinese also prompted questions anew for Lu at the MFA. Yet for the second time this week, Beijing took clear offense to a politicized assessment of its interests.

“Poor infrastructure is one of the main bottlenecks choking Africa’s development and progress,” Lu said, stressing that aid for the ECOWAS facility was built at the organization’s request and, as with myriad other investments, is welcomed by the African people. “As for the groundless accusations of certain Western media, I can only say that they are measuring other people’s corn by their own bushel.”

Lu’s use of the colloquialism was similar to MFA colleague Hua Chunying’s earlier use of folksy proverbs to suggest that the U.S. is harboring groundless suspicions because it’s guilty of its own hegemonic vision. It’s been a common theme as concern over China’s investment and influence grows in Washington, and those rumblings have come from various corners. The contentious U.S. relationship with China is made more complicated by the recent trade and tariff tiff, and by President Xi Jinping’s influence over North Korea as the U.S. moves on denuclearization talks even as Kim Jong Un made a calculated Beijing visit.

China earlier balked at remarks made by former U.S. Secretary of State Rex Tillerson, as he embarked on his ill-fated state visit to five African nations in early March. Tillerson said China’s African investment and affairs are based on cultivating African debt and dependency, a charge that Beijing was quick to refute.

Yet the more-visible Tillerson wasn’t the only U.S. official pressing for a change in Africa’s relationships. Also in March, U.S.  Congressman Bradley Byrne (R-AL) expressed concern over “recent Chinese actions in Africa and efforts to expand their influence in the region,” while specifically pointing to Djibouti’s strategic Horn of Africa position, and concerns over Beijing’s plans for an expanded military presence.

“It is becoming clear what Chinese influence has bought today,” Byrne said in a letter to U.S. Secretary of Defense Jim Mattis. “The concern is what will it buy tomorrow.” His colleague, Congressman Devin Nunes of California – a Republican who also chairs the U.S. House Intelligence Committee – echoed his remarks and said last Sunday that he plans an inquiry into the growing threat of China tied to Djibouti.

AFRICOM commander and Marine Corps Gen. Thomas D. Waldhauser, during a March 6 hearing, made clear the importance of a higher visibility for the U.S., which seems to have suddenly realized it hasn’t developed relationships that China has assiduously promoted for the better part of two decades now.

Lend our ears to the African people

With Namibian President Hage Geingob just wrapping up this week’s visit to Beijing – and noting his country’s friendship with North Korea while he was there – the Chinese ministry spokesman quoted him while defending the China-Africa connection. “China has never colonized or looted Africa, and always treated small and medium-sized African countries on an equal footing,” Lu said. “China lent support to Africa’s just cause in the past and is now helping Africa to develop. China is the sincere partner and friend of Africa, and African people are opposed to those groundless accusations against China.

“I think that we’d better lend our ears to the voice of the African people,” Lu concluded.

It’s that South-South positioning that China always does so well, and there’s cause for Beijing to do so. The history’s not inaccurate. Their concurrent if unequal arc of development is not inaccurate. Zimbabwe’s hydropower dam is just one piece of a “One Belt, One Road” vision that runs through the heart of the continent, and Africa-China investment opportunities have the potential to reach $445 billion by 2025.

Yet for all the rhetoric from China, it’s not clear that Beijing is actually listening to Africans and their nations either. In this skirmish with the West over African land, African resources, strategic financial investments, or diplomatic and military priorities, China and the U.S. are getting louder. What we’re not hearing are the African people – on environmental concerns, on job creation, on their own sovereignty and security – and the absence of voices is a silence that’s starting to get pretty deafening.