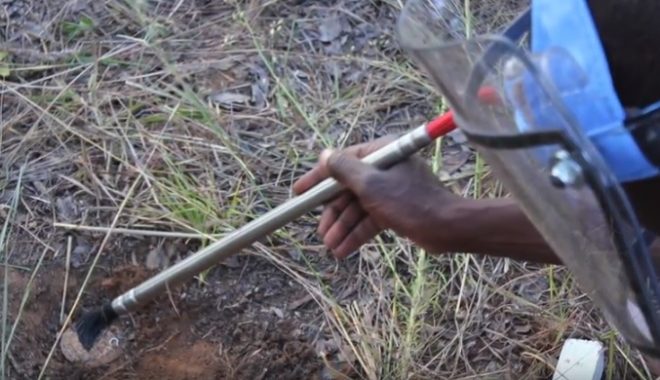 Zimbabwe has launched its first-ever landmine clearance strategy, designed to deal with a problem that has plagued the southern African nation since the Ian Smith era and the 1970s fight for liberation.

The National Mine Action Strategy describes goals of a plan that will run through 2025, seeking to remove what’s left of an estimated 3 million anti-personnel mines initially compromising the safety and use of 310 square kilometers.

Much of that mined land was along the northern and eastern borders. About 66 square kilometers of it remains a risk affecting villages, agricultural land and wildlife conservation areas, but there’s unique challenges to each area.

“The Musengezi to Rwenya River minefield, for example, is located close to villages, in proximity to agricultural and grazing land,” the action plan explains. “The Sango Border Post to Crooks Corner minefield is located in the southeastern corner of Zimbabwe, adjacent to the Gonarezhou National Park that hosts some of the world’s greatest wildlife; it is also in close proximity to cattle ranching areas.”

The Sheba Forest to Leacon Hill and the Rusitu to Muzite Mission minefields are located in hilly and mountainous areas, with thick bush and vegetation.

There’s incomplete data on death and injuries, but Zimbabwe says a Halo Trust survey conducted in five northeast districts identified 134 victims, 16 of them in the 2013-2014 study year. Nearly 80 percent were male with almost half – 49 percent – injured or killed while hunting, cattle herding or farming.

Zimbabwe’s National Mine Clearing Unit has five teams; in recent years, international NGOs help to support the work. Norwegian People’s Aid (NPA) was the first to establish a demining presence there in 2012, and began actively clearing land the following year. HALO Trust also began work in 2013. Today, the country has divided the remaining seven contaminated areas among five different operators.

The planned removal of all remaining landmines will have positive economic effects as well as the protection of life. Officials point to a boost in tourism after Victoria Falls was safely cleared in 2006, or the return of sorely needed agricultural land to productivity. Some 77 square kilometers of fertile land is still unavailable to nearby villagers in Zimbabwe because of landmines or unexploded ordnance.

Zimbabwe’s Mine Action Centre (ZIMAC) and its partners estimate that more than 120,000 animals, many of them livestock, have died since 1980. A 2015-2016 survey conducted by Halo Trust in Mudzi, Rushinga and Mount Darwin districts found that 33 per cent of households lost livestock due to mine incidents. In 59 percent of cases families lost cows, with goats lost in 30 percent of the accidents. 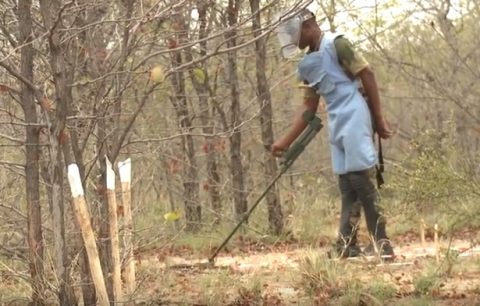 “Cattle and other livestock represent indispensable livelihood assets to most rural communities,” the action plan said, noting an average financial impact of USD$600 per family. “Loss of livestock therefore has devastating impacts on communities’ secure and sustainable livelihoods.”

While many people don’t think of landmine clearance as a sustainability issue, Zimbabwe does – and the plan introduced in March ties success to the Sustainable Development Goals (SDGs), following along the lines of a 2017 report conducted jointly by the United Nations Development Program (UNDP) and Geneva International Centre for Humanitarian Demining (GICHD).

The GICHD-UNDP study determined that freeing land from mines removes barriers to a wide range of basic social services, including health care (SDG 3), education (4) and water and sanitation (6). Access to economic and natural resources protects livelihoods and builds resilience, unlocking communities from poverty and food insecurity (1, 2).

Clearing the way for the future

The GICHD, Halo Trust and NPA – along with the Mines Advisory Group (MAG), APOPO and International Committee of the Red Cross (ICRC) – have collaborated since 2016 on Zimbabwe’s action plan and its research. They focus on the lived experience of people in communities like Gwaivhi near the border with Mozambique, which was declared mine-free in 2015; the magnitude of Zimbabwe’s mine problem meant it needed a deadline extension.

“Out of desperation and poverty, some people who live adjacent to known mined areas have as a result of land pressure taken unnecessary risks by cultivating crops or herding their livestock in mined areas,” the Zimbabwe plan explains. ZIMAC said a minefield cleared last September had some sections less than 100 meters from inhabited areas. “People used to cross to fetch water from the river,” the group said. “It claimed a lot of limbs and livestock and some deaths.”

Even the ability to connect is compromised by the 40-year-old land mines and a war left long ago to history. Minefields sometimes prevent community members from seeing and socializing with friends and relatives that live on the other side of mined areas too: “Some have attempted to cross these minefields in order to maintain contact or communication with relatives and the unlucky ones have been injured or killed by mines.”

The plan anticipates full clearance by 2025, and Zimbabwe’s well-trained domestic unit means it will likely be up to the task of maintaining success once international partners are no longer directly active in mine removal. Yet Zimbabwe’s plan establishes other goals, including a 2018 funding strategy and a 2019 target for a communications strategy, designed to raise awareness for the national action plan.

Goals also include ZIMAC-led events on April 4 in conjunction with International Mine Awareness Day.