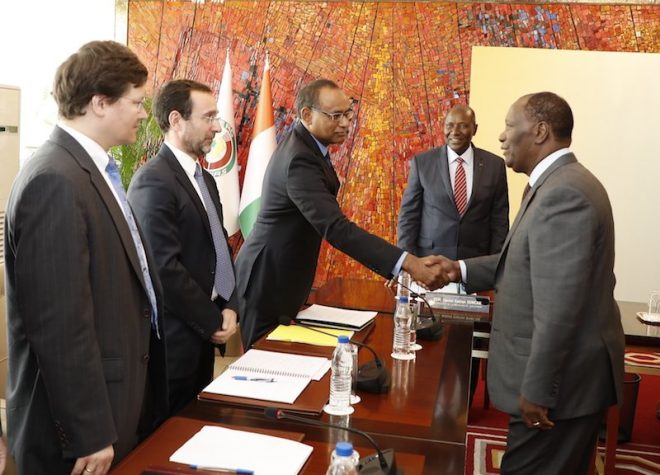 Côte d’Ivoire continues its fast-paced economic growth, and its medium-term outlook remains favorable although some risks remain, according to an International Monetary Fund (IMF) staff team that’s just wrapped up a visit to Abidjan.

The IMF team led by Dhaneshwar Ghura met with, among others, President Alassane Ouattara, Prime Minister Amadou Gon Coulibaly, and Minister of Economy and Finance Adama Koné. Their preliminary assessment of Côte d’Ivoire’s performance supports ongoing loan and funding agreements with the IMF.

GDP grew by 7.8 percent last year despite the fall in cocoa prices, and inflation held at about 1 percent, well below the 3 percent regional threshold of the Western Africa Economic and Monetary Union.

“Economic activity is projected to remain strong and the medium-term outlook is for robust growth to continue,” the IMF said. “Inflation is expected to remain contained.”

The budget deficit was 4.2 percent of GDP in 2017, which was lower than programmed. Côte d’Ivoire  met all performance criteria, missing just one indicative quantitative target and one structural benchmark expected for December 2017.

“There are also risks to the outlook from slower than expected progress in revenue mobilization, unfavorable terms-of-trade shock and tighter global financial conditions,” the IMF cautioned.

Ivoirian officials and IMF staff agreed on the need to accelerate reforms tied to maintaining sustainable growth, and the need to make that growth more inclusive. Progress on new investment projects is expected to boost the country’s current National Development Program, which runs through 2020, while renewed attention to domestic revenues is needed to support spending and the ability to meet debt obligations.