Home>News>Zambia's PF tosses Cambridge Analytica into spat with Hichilema
By AT editor - 8 April 2018 at 4:13 am 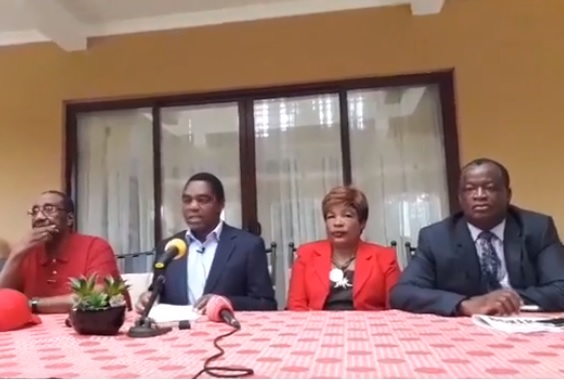 Politicians in Zambia are distancing themselves from opposition political leader Hakainde Hichilema, following his accusation that Janet Rogan, the United Nations Development Program (UNDP) representative and country coordinator in Zambia, helped President Edgar Lungu to manipulate votes in the 2016 election.

They’re also taking the opportunity to call for an inquiry of any Cambridge Analytica role in Zambian elections too, demonstrating the potential for the international fallout over CA to further become a political weapon.

Hichilema, second from left, is the United Party for National Development (UPND) candidate arrested on bizarre treason charges in 2017 who disputes his narrow loss to Lungu. He railed against corruption on Friday in a press briefing broadcast from his home on Facebook. During his discussion of alleged electoral fraud, Hichilema made specific accusations about Rogan’s involvement without providing evidence.

“He said the UN is a multilateral organization that should stand for all Zambians and not take sides with the ruling party at the expense of promoting the tenets of democracy in the country,” the UPND said in a summary statement. Rogan’s “maneuvers” include working with the country’s electoral commission to assure a Patriotic Front (PF) win, and manipulating paper ballot printing in Dubai, he said.

Rogan did not immediately comment, but PF officials said they were shocked by Hichilema’s public claim and called him a desperate bad loser. “Considering Mr. Hichilema’s desperation, we are asking government institutions to probe Cambridge Analytica to ascertain possible improper involvement in the 2015 and 2016 elections,” the ruling party said. “It is without doubt that UPND engaged in serious electoral malpractices in the 2016 elections and that is the only ground they would claim to have won a national election with three (3) Provinces out of ten (10).”

“As NCP, we want to express our disappointment with unwarranted attacks on Janet Rogan by UPND leader Hakainde Hichilema,” Chanda said. “The man has ran out of ideas of how to run a political party and I can just advise him to go back and concentrate on looking after his cattle.”