Home>Commentary>Syria impasse: Africans on UN Security Council frustrated by failure
By Laureen Fagan - 11 April 2018 at 7:29 am 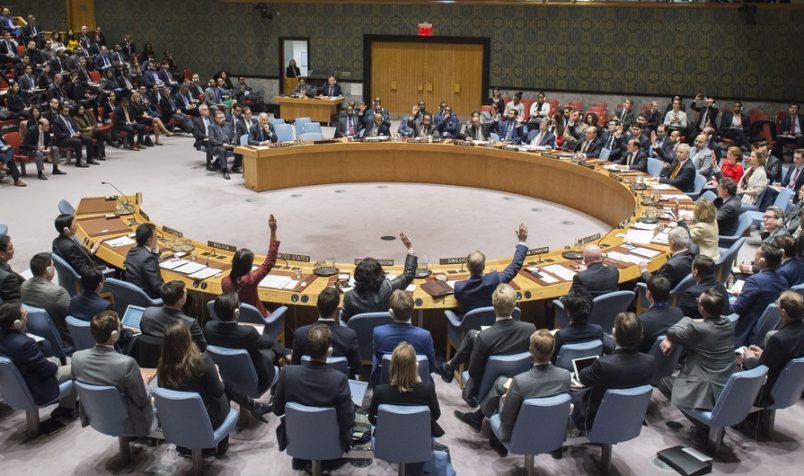 The African nations on the United Nations Security Council voted in favor Tuesday of Russia’s resolution on the chemical weapons situation in Syria which – along with one introduced by the United States – failed to pass.

It was the latest in the long struggle to achieve consensus and act on the use of toxic chemicals against civilians in the seven-year conflict, and yet another frustrating meeting for the African delegations who said the divisions on the council were again too deep to resolve the impasse.

Ethiopia and Equatorial Guinea voted for Russia’s draft resolution, while Cote d’Ivoire abstained from voting on that version, which was not adopted in a 7-6-2 vote. The three African nations all were among 12 who voted for the U.S. version too, which would have established a new investigative mechanism with more emphasis on identifying those responsible for chemical weapons use than the Russian version.

That vote was 12-2-1, with China abstaining, but Russia’s status as a permanent member of the Security Council means its no vote blocked passage of the resolution. Russia has now used its veto vote 12 times to block action on Syria, the UN said, as delegates expressed their dismay over the political paralysis.

‘We don’t enjoy what we see’

Anatolio Ndong Mba, representing Equatorial Guinea, said it was frustrating that the Security Council failed to adopt either resolution after his delegation voted for both. He urged his counterparts to consider other versions to find a consensus.

Bernard Tanoh-Boutchoue, representing Cote d’Ivoire, said the West African nation preferred the U.S. draft because it clearly expressed the international community’s determination to see those responsible for chemical attacks on innocent civilians held accountable, and it better ensured the credibility of the investigation. “By voting in favor, Côte d’Ivoire also sought to demonstrate its solidarity with the victims of the recent attacks in Syria,” the UN meeting notes said.

He hoped the Security Council members would find more unity in the future, as did Tekeda Alemu of Ethiopia. “Frankly speaking, we don’t enjoy what we see,” Tekeda said, expressing disappointment over the situation among members. He said it was critical to act responsibly over the alleged weekend attack in Douma, about 10 kilometers northeast of Damascus, but it was also imperative that the Security Council “repair the damage” done to global chemical weapons controls.

Yet another failed Syria resolution

The Ethiopian delegation also voted in favor of a third resolution, although it too failed to pass. Again introduced by Russia, this draft left out any language calling for an investigation. Rather, it called for Security Council condemnation “in the strongest terms” against the use of chemical weapons in Syria, expressed alarm over the new allegations in Douma, and backed the existing Organization for the Prohibition of Chemical Weapons (OPCW) fact-finding mission accepted by both Russia and Syria.

That resolution received lukewarm support, with a final vote of 5-4-6. Equatorial Guinea and Cote d’Ivoire were among the half dozen abstentions, as were Kuwait, Netherlands, Peru and Sweden.

On Tuesday, the OPCW said its Director-General, Ambassador Ahmet Üzümcü, had requested that Syria make the necessary accommodations for a fact-finding mission with a team ready to deploy shortly. “The OPCW Situation Centre has been closely monitoring the incident and made a preliminary analysis of the reports of the alleged use of chemical weapons,” Üzümcü said in a statement from The Hague.

The OPCW, charged with implementing the international Chemical Weapons Convention, has been focused on Syria since July 2012 when Damascus – which is not one of the 192 countries that is party to the convention – publicly acknowledged possession of chemical weapons including lethal nerve agents. Despite U.S. warnings over their use in Syria’s conflict, an attack on Homs came in December 2012.

It was attributed to President Bashar al-Assad’s forces, the first of what has become, in Syria’s long and heartbreaking civil war, too many deadly incidents and contradictory claims about who is responsible.

A toxic spiral, with more meetings

Reports of chemical weapons attacks in March 2013 centered on Aleppo and the Damascus suburb of al-Atebeh. In what has become routine, the Assad regime denied responsibility and blamed the Syrian opposition. The first of the OPCW investigations – and the UN Security Council’s endless and ineffectual cycle of concern and condemnation – was announced in December 2013.

More attacks followed, and by April former UN Secretary General Ban Ki-Moon charged Assad with blocking investigations. France (and ultimately the UN) had already said they had proof of sarin gas use; the U.S. cited evidence that some 1,400 people died in August of that year in Ghouta, with Syria possessing sarin, mustard and VX agents, and the means to use them.

Following the August 2013 attack, the UN Security Council called an emergency meeting and issued a statement calling for further clarity on the incident. One week later, they called for another meeting.

Some progress was achieved in 2014 as Assad turned over stockpiles of chemical weapons, with a number of European countries assisting in their disposal – but by 2015, the OPCW said it was clear that Islamic State extremists fighting in Syria were also responsible for chemical weapon attacks on civilians.

A chemical attack again in 2016 near Palmyra. Again in 2017 at Khan Sheikhoun, and again in February 2018 near Al Shifuniyah. Again, the reports came on Saturday claiming the latest attacks at Douma.

The U.S. warned it was prepared for more military action. A Russian official warned that this is the most dangerous moment in their bilateral relations since the Cuban missile crisis in 1962.

There were more meetings.