Home>News>Taiwan's leader arrives for controversial Swaziland visit
By AT editor - 17 April 2018 at 11:41 pm 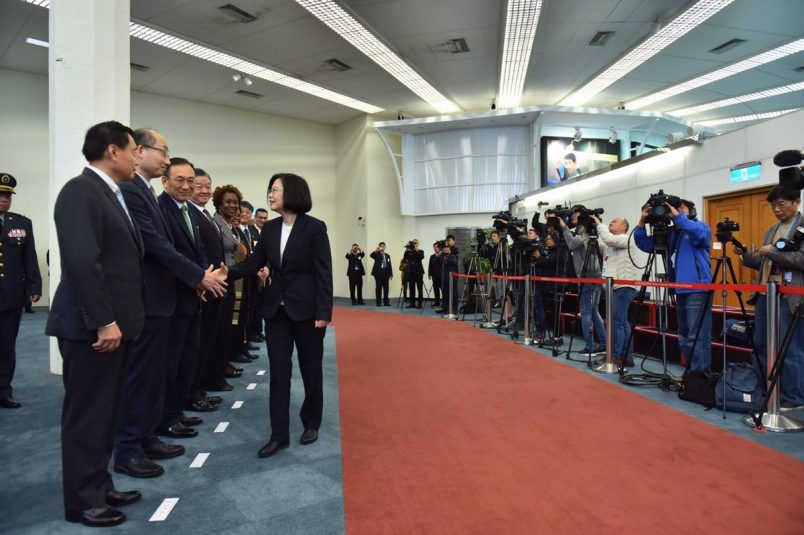 The leader of Taiwan arrived in Swaziland on Tuesday for a controversial four-day official visit that coincides with the 50th anniversary of independence celebrations in the southern African kingdom.

Tsai Ing-wen and her delegation were greeted by King Mswati III, who then hosted a state dinner for his guests. Swaziland also is celebrating the king’s 50th birthday as part of the “50-50” celebrations, which also mark the 50th anniversary of diplomatic relations between the two nations – a controversial point with China, which denies Taiwan’s independence.

“There is only one China in the world. Taiwan is an inalienable part of the Chinese territory,” said spokeswoman Hua Chunying of the Ministry of Foreign Affairs in Beijing. “This is not only an objective fact and common sense but also the general consensus of the international community,” she added when asked about Tsai’s trip during a press briefing.

Taiwan maintains frowned-upon “diplomatic alliances” with just two African nations, Burkina Faso being the other one, as it finds itself in an increasingly difficult position while China extends its influence on the continent.

For her part, Tsai said the trip to Swaziland will provide an opportunity to evaluate the success of various projects achieved through bilateral cooperation between the two countries. “There are many partners and companies from Taiwan working in Africa, giving Taiwan a real presence there, and we want to visit them to provide encouragement and show our appreciation,” said Tsai’s office in a statement.

The King Mswati III celebrations have been controversial in their own right, as many in Swaziland say they resent the expense of a lavish party in a country facing economic and other challenges.