Home>News>U.S. hearing focuses on Eritrean human rights in driving migration
By AT editor - 19 April 2018 at 8:05 am 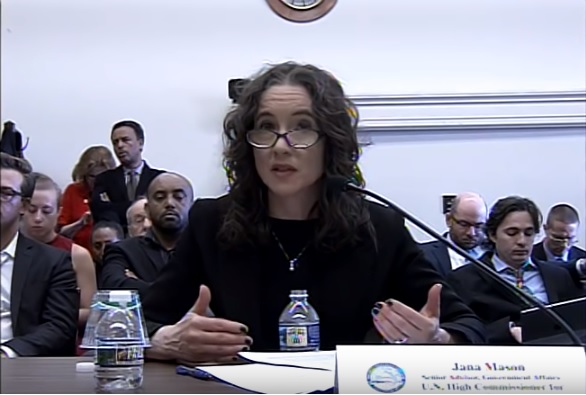 Representatives from the United Nations and international NGOs participated in a hearing on Eritrea’s record Wednesday as the United States Congress and its Tom Lantos Human Rights Commission focused on the drivers behind high rates of Eritrean migration.

“Migrants from the small east African nation of Eritrea make-up a disproportionate number of those included in the global refugee crisis,” the commission said, noting that about 8 percent of the population was in refugee or asylum seeker status at the end of 2016.

“Many of these asylum seekers are exploited by smugglers, and traffickers, or find themselves in Libyan slave markets enduring detention, torture, and forced labor,” the commission said. “What are the human rights conditions in Eritrea that are causing so many people to leave their homes at the risk of slavery, trafficking, and death?”

Among those providing expert testimony were Jana Mason, a senior advisor to the United Nations High Commissioner for Refugees; Father Thomas Reese of the United States Commission on International Religious Freedom; and Maria Burnett, the Human Rights Watch director for East Africa and the Horn.

“Based on Human Rights Watch research, Eritreans’ most predominant impetus for flight is to escape what is known as ‘national service,’” Burnett said. “To be clear, limited terms of national conscription do not, in themselves, constitute human rights violations. But it is not limited in Eritrea. The Eritrean government disregards the proclamation’s time limits. Many conscripts are forced to serve indefinitely.”

Other significant drivers include repression of President Isaias Afwerki’s political opponents, a lack of press and religious freedoms, torture and other human rights violations, the witnesses said.

Yemane Meskel, a spokesman for the Eritrean government, said media coverage and the political discourse on Eritrean migration has “largely remained shallow and distorted” and lacks a nuanced analysis of the drivers and actors.

A video of the commission hearing is available here.