Home>News>In Benghazi, a Haftar warning for those spreading health rumors
By AT editor - 28 April 2018 at 5:21 pm 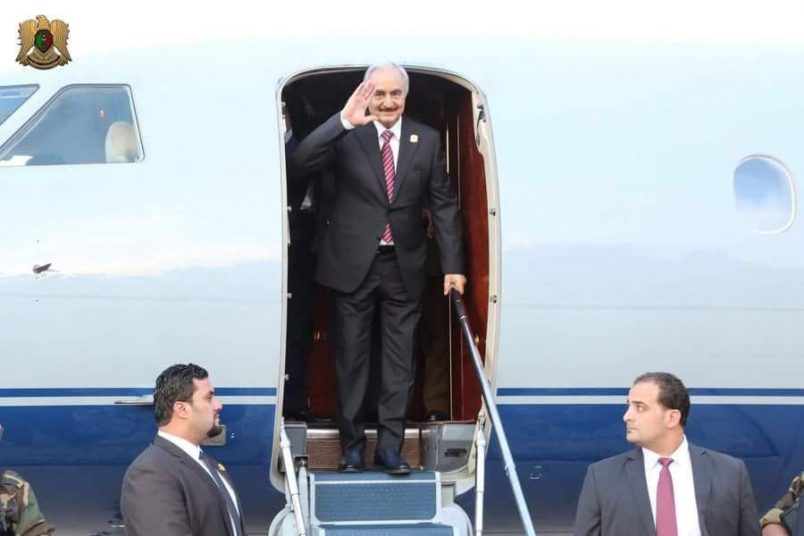 Libya’s Khalifa Haftar has returned to Benghazi, where he addressed  the nation in a televised broadcast following weeks of speculation about his health and the future of his Libyan National Army (LNA).

Haftar assured Libyans of his good health, while admitting that he needed to be seated to speak rather than standing before them. He also issued a veiled warning directed at those who spread rumors about his health and promised they’ll answer for it.

Libyan media outlets, citing spokesman and military leader Saqr al-Jaroushi, said Haftar traveled from Cairo for his official reception. He was in Egypt following treatment in Paris for a medical condition that remains unclear, but has been previously reported as a stroke.

Haftar has been intentionally silent about his health, an LNA spokesman said. Few details about his illness were released and the LNA did not say how long Haftar had been in Cairo.

LNA spokesman Ahmed al-Mismari initially denied reports that Haftar, a potential candidate in Libyan elections planned for later this year, was ill. He claimed Haftar was in “excellent health” and attending to normal duties, but later admitted that Haftar was indeed receiving care in Paris and would return to Libya in a few days.

Haftar’s illness added to the fault lines within his own military government in Libya’s east, which remains in opposition to the Western-supported Government of National Accord headed by Fayez Al-Sarraj and his Presidency Council in Tripoli.