Home>African Future>Moroccan activists create human sun to press for renewable energy
By AT editor - 30 April 2018 at 4:41 am 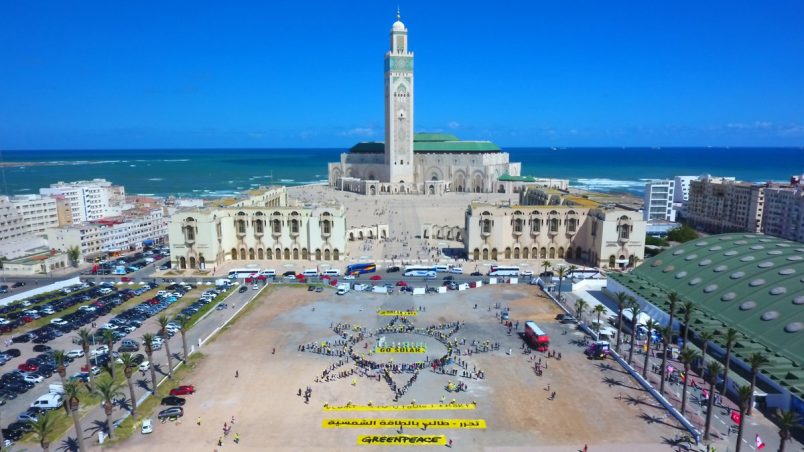 The participants, part of the “Break Free – Go Solar” campaign supported by Greenpeace, created the sun shape near the landmark Hassan II mosque. They were accompanied by messages in English, Arabic and Amazigh – an indigenous language across North Africa – that called on world leaders from the Middle East and North Africa to accelerate the transition from fossil fuels to renewable energy.

“We chose Morocco because it is an incontestable global renewable energy leader and therefore the country we should expect most from,” said Julien Jreissati, a spokesman for Greenpeace Mediterranean in the region.

“During the COP22 the world has discovered the Moroccan people’s strong dedication to fight climate change. Today they have yet again shown their unwavering resolve to see a world powered by 100 percent renewable energy and freed from the grasp of dirty fossil fuels.”

The event was supported by local NGO partners including the Moroccan Alliance for the Climate and Sustainable Development (AMCDD). They called on Moroccan authorities to change existing renewable energy laws so it’s easier for individuals to own renewable sources, and to connect them to the grid.

Break Free is a global movement with a presence in more than 25 countries, focused on resistance to the existing fossil fuel-dependent culture and an urgent need to address climate change through renewable energy sources.