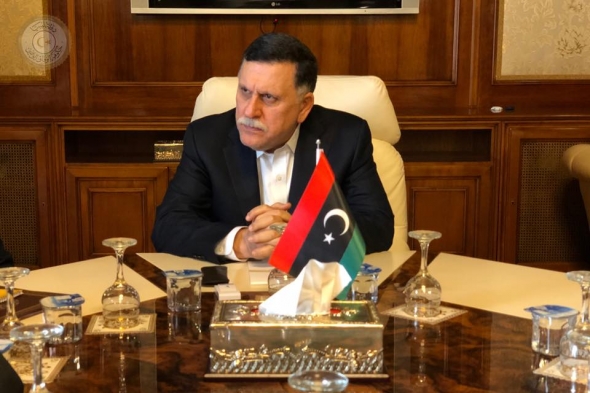 Libya’s Fayez Al-Sarraj, head of the Presidential Council for the Government of National Accord (GNA),  called an emergency meeting with security leaders Wednesday following a terrorist attack on the national election headquarters in Tripoli.

The head of the Presidential Council for the Government of National Accord (GNA) issued a statement condemning the attack on the High National Elections Commission (HNEC) offices. The suicide bombers killed at least 12 people, election officials among them, and injured another seven, according to Libya218 reports. The building was set ablaze following a gun battle between security forces and the attackers.

The incident comes as Libyan officials gear up for elections later this year in a country that remains bitterly divided, and subject to relentless security challenges likely to jeopardize the electoral process.

“Such terrorist attacks will not deter Libyans from moving forward in the process of consolidating national unity and building the state of law and institutions,” said the United Nations Mission of Support in Libya (UNSMIL) in a statement condemning the attacks  and calling for swift justice from Libyan authorities.

“Such cowardly attack on this democratic edifice is a direct aggression against the Libyan people and their will to build a just and civil state, and against their hope of finding ways out of the transitions to establish peace and stability across Libya,” Salame added.