Home>News>BRGM geologists discuss sudden swarm of quakes near Mayotte
By AT editor - 15 May 2018 at 8:14 am 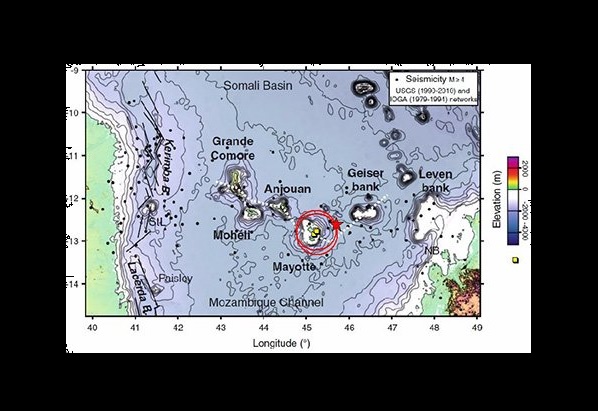 The small Indian Ocean island of Mayotte has experienced an earthquake swarm since last week, according to BRGM Mayotte, the France-based geological agency serving the territory – and the swarm is consistent with seismic activity last seen in the 1980s.

In a statement Monday, the BRGM said Mahorans began feeling earthquakes on Thursday night with at least eight quakes at or higher than a 4.0-magnitude recorded. All told, there were more than 250 small events recorded at the Iloni station in a four-day period. The Iloni data-monitoring site is one of three used by the agency.

All of the quakes appear to be coming from the same general spot, which is circled on the map.

There was no let up on Monday at the Mamoudzou recording station, and the BRGM said other earthquakes of similar magnitude will likely be felt in days to come. “These earthquakes do not produce damage and, although at sea, are too weak to generate tsunamis,” the agency said.

Mayotte, a troubled territory disputed by neighboring Comoros and the French, does not have a history of large or frequent quakes. A 5.2-magnitude event in 1993 was the strongest recorded in at least 60 years, and no destructive earthquake greater than a 6.0 is recorded at the island.