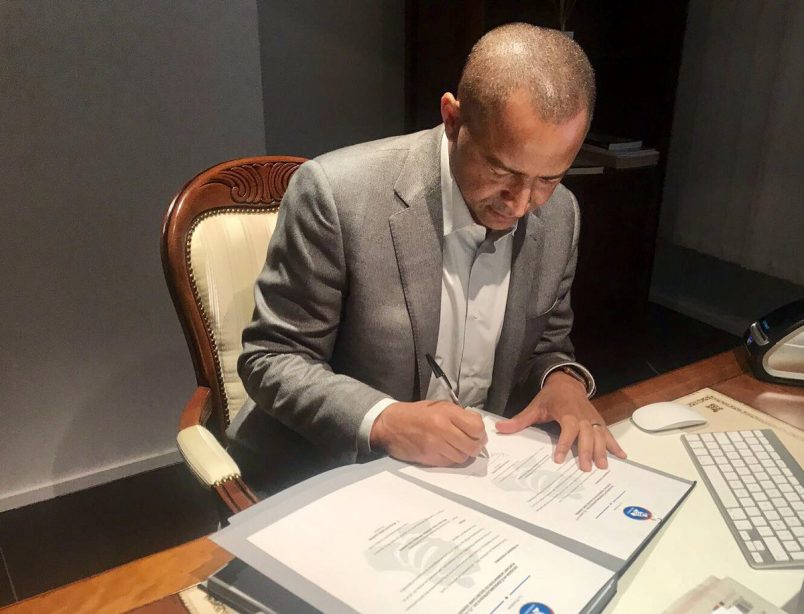 There’s been much speculation on when and how Moïse Katumbi, the exiled Congolese political leader who announced a presidential run in March, will return to the country.

Katumbi, the candidate of the “Together for Change” coalition challenging Democratic Republic of Congo President Joseph Kabila, has said he will return home by June but late last month shifted the timeline, tying it to evidence and an assurance that long-delayed elections will move forward in December as planned.

On Sunday, the former governor of Katanga told Le Soir in Belgium that Kabila remains afraid of him.  It’s a claim he’s made before, telling the BBC in March that his return means the end of Kabila’s mandate.

Yet Katumbi has yet to arrive in Kinshasa; there’s a newly announced campaign rally planned for June 2, but no clarity on whether he’ll be there or not. Meanwhile, Congolese communications minister Lambert Mende said Friday that Katumbi is currently not considered to be a citizen of DR Congo.

“The facts are clear,” Mende said in an interview. “When you contract another nationality, as is the case with Mr. Katumbi, you lose your Congolese nationality whether you are native or not.” Katumbi held Italian citizenship from 2000 to 2017, which the Congolese government says would make him ineligible for office. Mende said officials have received no request from Katumbi to “reinstate” his citizenship.

Katumbi has lived in exile since the Kabila administration convicted him in absentia to three years in prison on real estate fraud – a charge Katumbi denies as politically motivated. His campaign last week also issued a statement denying new accusations of involvement in plans to overthrow the Kabila regime by force, and assuring Congolese and the international community of his peaceful ambitions.

Pressure on Katumbi is rising

In Kinshasa, there’s been growing pressure to support the Together for Change coalition, which has coalesced with a number of opposition parties behind it. Felix Tshisekedi, head of the key Union for Democracy and Social Progress (UDPS) party, has asked that the Kabila regime permit Katumbi’s return.

On Sunday, Delly Sasanga – The Together for Change general secretary, and point man for opposition parties aligned under the l’Alternance pour la République(AR) – insisted that the June rally be held without interference from Congolese officials who have too often shut down protests with violence.

“There is no reason for our meeting to be prevented. It’s a right, we’re not begging,” Sasanga told Actualite CD. “We are demanding respect for the constitution and the law. We will do so in accordance with public order and democratic rules.”

There are already signs that Kabila’s government is stifling Katumbi backers, including reports of a May 3 meeting in Lubumbashi, the capital of the Katanga province he once governed, that young supporters were prevented by Congolese police from attending.

Last week, the national police accused Katumbi of planning a coup based in the troubled region of Ituri, where ethnically driven violence has claimed more than 100 lives and displaced at least 300,000 people. The Katumbi campaign immediately denounced the allegations that their Together for Change candidate was connected to rebel leader John Tshibangu, who was taken into custody in February after threatening to remove Kabila by force if he did not leave office in 45 days.

In the response, Katumbi’s team accused Kabila of attempting to discredit their candidate and creating a pretext for delaying the elections he has refused to hold since December 2016 – a delay which has caused untold suffering.

Together for Change further accused the Kabila regime of causing the country’s sorrow and tragedy from the Kasais to the Kivus, and said the Congolese government was directly implicated in the assassination deaths of United Nations experts Michael Sharp and Zaida Catalan, as well as others.

That last accusation followed the visit of Fatou Bensouda, chief prosecutor for the International Criminal Court (ICC) based in The Hague, early this month to begin an investigation into possible crimes against humanity in the DR Congo. She met with Kabila for about an hour to discuss the human rights situation.

Kabila also has seen increasing though limited pressure from the Southern African Development Community (SADC), and there are reports that the Congolese opposition wants to meet with SADC leaders because they’re concerned that the president who refused to step down after completing his constitutionally limited second term will again stall an election process he has never fully embraced.

Kabila has refused to publicly acknowledge that he will not seek another term, as demanded by the Roman Catholic bishops (CENCO) and the Comité Laic de Coordination, which led millions of people in marches earlier this year to demand democratic reforms. Participants in those church-based rallies were met by security forces, leading to a number of fatalities and arrests that included clergy members.

So it’s easy to see why the Together for Change coalition condemned the latest accusations against Katumbi, who has solidified a frequently fractious Congolese political opposition behind him, and stepped up visibility for their campaign. It’s equally clear that, given the Kabila track record, the context for any Katumbi return is fraught with complexity and risk, and the exiled leader may not return until he’s confident that DR Congo will really hold the December elections.

The trouble is, no one is that sure that he will.