Home>News>Namibia's latest quake comes as officials dispel 'big one' prediction rumor
By AT editor - 24 May 2018 at 4:31 pm 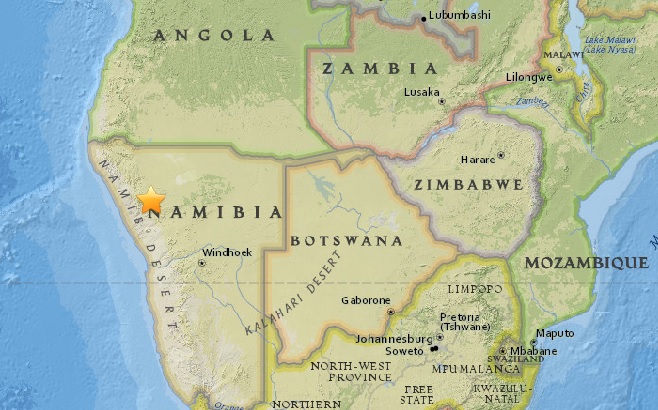 The 5.0-magnitude earthquake that struck Namibia on Thursday morning comes as the country’s Ministry of Mines and Energy has been trying to dispel rumors of a predicted “big earthquake” that were promoted by China Global Television Network (CGTN) earlier this month.

The moderate quake happened shortly after 9 a.m. local time, about 67 kilometers to the northwest of Khorixas, according to the United States Geological Survey (USGS). Khorixas is a community of some 13,500 people in the Kunene region, a remote and mountainous area near important tourism and geology sites where a similar earthquake happened in March.

There were no immediate reports of damage or injuries. The quake occurred in the Kaoko orogenic belt, which runs northwest along the Namibian coast and is known to be seismically active. Quakes there, while infrequent, are associated with the fault line; the largest quake ever to occur in Namibia measured a 5.6 magnitude in 2009.

But the event follows the sensational news of a scientist’s prediction of a large earthquake striking Namibia in 2019. Bufelo Lushetile, the deputy director for geophysics at the country’s geological survey – a part of the ministry department – took to the airwaves on Monday to assure Namibians that his team is not aware of a specific prediction and the science does not yet support it.

“Of predictions for earthquakes, there have been advances in research in this field, but up until now there hasn’t been any breakthrough,” he told Namibian Broadcasting Corporation.

To view the interview with Lushetile, see this NBC link.