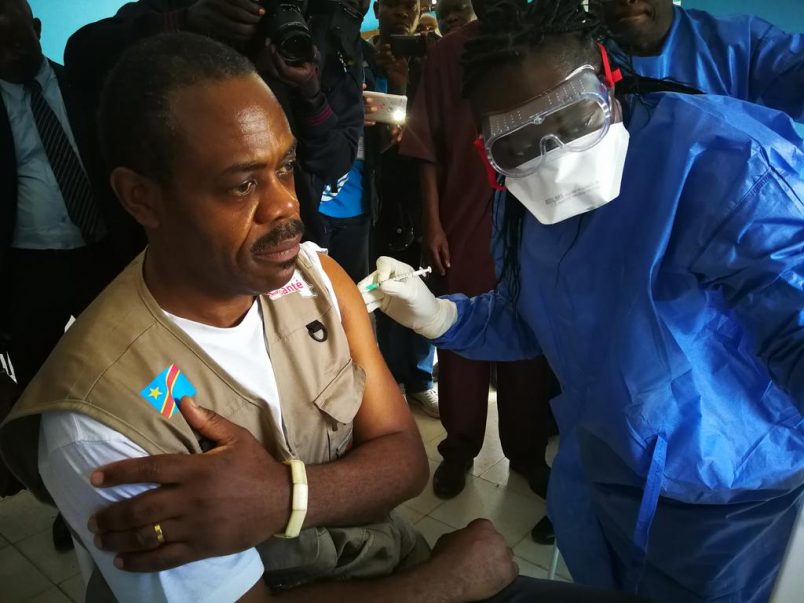 Health officials in Democratic Republic of Congo say almost 700 people have received an experimental Ebola vaccine in the past 10 days as medical teams work to contain the outbreak in the country’s northwest.

Dr. Oly Ilunga, the country’s health minister, said Thursday that about 500 of them are in Mbandaka, a city of 1.2 million people on the Congo River where a confirmed case was discovered after the latest Ebola virus outbreak began in and around Bikoro. Vaccinations in that town began on May 28, with 113 people treated so far. An additional 70 people received the “ring vaccine” in Iboko.

“Ring vaccination is a new and vital tool in the control of Ebola,” said Dr. Michael Ryan, WHO Assistant Director-General for Emergency Preparedness and Response. “I just spent the day out with the vaccination teams in the community, and for the first time in my experience, I saw hope in the face of Ebola and not terror. This is a major milestone for global public health.”

The ring theory targets clusters of people around confirmed Ebola cases, of which there are at least four in Mbandaka. Thursday’s updated report put the number of cases at 50, with 37 of them confirmed. A total of 12 people have died, Congolese officials said.

The World Health Organization said the vaccine is being offered to high-risk people in contact with known victims, as well as health care workers and first responders. The vaccination program, supported by a number of partners, also relies on collaboration between DR Congo and Guinea, where health experts have experience with a previous field trial.

The rVSV-ZEBOV Ebola vaccine, which Ilunga himself received, is developed by Merck but not yet fully licensed. It is available under compassionate use provisions, which means it is proven safe and there is no viable alternative although it has not completed a full regulatory process.

In December 2016, the British medical journal The Lancet reported the shot to be 100 percent effective, after researchers conducted the Guinea study. The research has also met with criticism and skepticism about the drug’s efficacy.

A team of World Health Organization experts left for China on Sunday, as WHO Director…

No coronavirus cases in African nations as death toll reaches 908

So far, there are no confirmed cases of the coronavirus on the African continent, according…