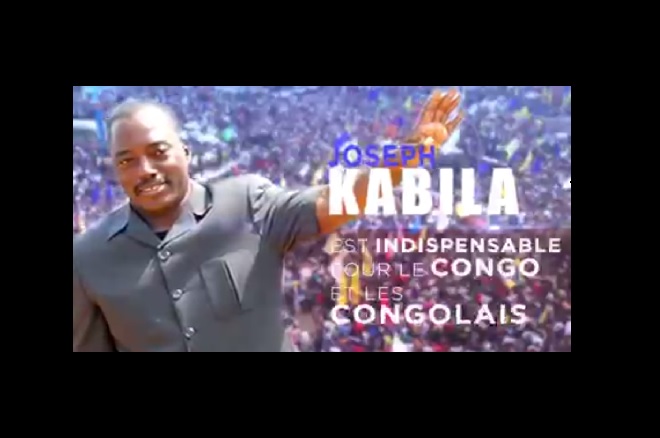 At the National Episcopal Conference of Congo (CENCO) headquarters in Kinshasa, the anti-Kabila banners came down this weekend. At the same time, a new video – its content and style appearing very much like campaign material – has suddenly appeared in support of President Joseph Kabila in the Democratic Republic of Congo.

The Roman Catholic bishops of CENCO were instrumental in negotiating a path forward after Kabila refused to step down in December 2016, at the end of his constitutionally mandated second term. As the president delayed elections and maneuvered to consolidate his power, the bishops issued a statement last November calling for Kabila to publicly announce that he won’t seek a third term.

The CENCO banners, which call for “no constitutional revision” and “no Kabila third term,” were removed Saturday by a municipal official who said they were not authorized. When interviewed by local media, Dolly Makambo insisted that CENCO messages were not targeted and he removes all such banners placed without permission.

Church leaders and the Congolese laity continue to stand against Kabila’s refusal to step aside, but the newly released video suggests he has no intention of doing so. It comes amid mounting concern that Kabila’s influence over the court will mean a constitutional change in his favor, possibly without the need for a referendum.

“It’s a two-minute homage (that credits) him with everything from reunifying the country after the 1998-2003 war to reviving agriculture and guaranteeing effective democracy in the DRC,” said the Institute for Security Studies. “It ends with the statement: ‘This man is indispensable for the Congo.’”

To access the entire ISS analysis on Kabila’s strategy, see this link.