Home>News>Tunisia, Italy spar on migration as latest Mediterranean death toll rises to 112
By AT editor - 5 June 2018 at 5:35 am 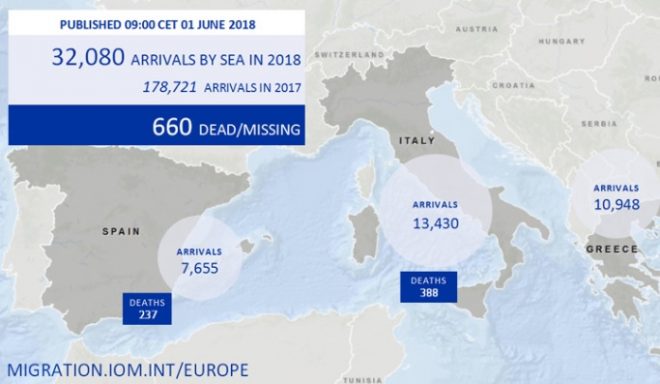 Officials with the United Nations migration agency say the death toll has reached at least 112 after a boat on the Mediterranean Sea sank off the coast of Tunisia at the weekend.

The boat was carrying an estimated 180 migrants, many of them from Tunisia, when it went down between the city of Sfax and the Kerkennah Islands. It is the largest such migrant tragedy to occur on the Mediterranean in recent months, as European governments working with their North African counterparts have tried to seal off the routes and stem the tide of migrants reaching European shores.

While migration across the sea from Libya has decreased, much of that traffic has shifted to Tunisia. More Tunisian migrants have reached Italy in 2018 than from any other country, which has sparked new diplomatic tensions between the two as Italy’s new anti-immigration government – sworn in on Friday – establishes itself.

The IOM said 13,430 migrants had arrived in Italy through May 30, far less than last year but still 42 percent of the total on the Mediterranean routes. There have been 660 fatalities so far this year, 388 of them on the central Mediterranean route prior to this incident.

Interior Minister Matteo Salvini announced on Sunday that the “party is over” for migrants who arrive by boat to Italy, as he visited the port of Pozzallo where many migrants are processed. He continued on Monday with comments warning that Italy cannot turn into Europe’s refugee camp, according to Reuters.

The Italian news agency ANSA said the Tunisian foreign ministry, speaking with the Italian ambassador, registered its shock over Salvini’s claim that the country sends its criminals off as migrants. The Tunisian statement stressed that Salvini’s remarks do not reflect an understanding of the countries’ cooperation on migration issues.