Home>Finance & Economics>EU signs new economic agreement with Liberia
By AT editor - 7 June 2018 at 5:59 am 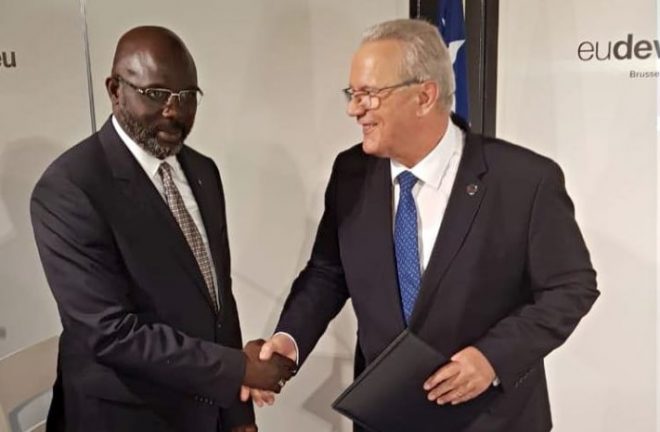 The European Union has signed a new Economic Cooperation Agreement with Liberia, and provided an initial €27 million in funding for the West African nation’s budget for the 2018-2019 fiscal year.

The commitment follows President George Weah’s trip to attend the annual European Development Days (EDD) Summit, held this week in Brussels. It is part of a new “Moving Liberia Forward” agreement with the EU.

In an address delivered to EDD participants, Weah underscored the contributions and the importance of women and girls in Liberia, in keeping with this year’s EDD theme. He spoke of being raised by his grandmother in one of the country’s poorest ghettos, and benefiting from her guidance and courage.

“In my own country Liberia, issues of gender equality, sexual abuse and violence continue to be a major challenge. As President of Liberia, it is my responsibility to lead the efforts to address and rectify these glaring disparities in our social and economic environment,” Weah said. “But beyond that, I will like to inform you that my commitment and dedication to this cause is also on a personal level. It comes from deep and longstanding appreciation and respect for the value of women and girls in our society which I incurred through my childhood upbringing.”

A more stable Liberia has created space for successful development, with women in key leadership roles including the vice presidency, the military and police, he said.

Weah also stressed the need for security cooperation with the EU in order to protect the country’s progress.