Home>News>Taiwan welcomes eSwatini leader, the last remaining African diplomatic ally
By AT editor - 7 June 2018 at 4:13 am 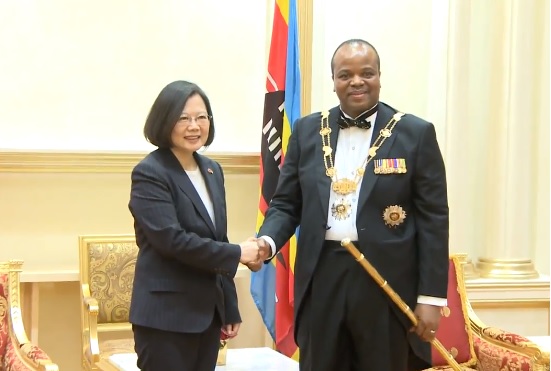 King Mswati III of eSwatini (formerly Swaziland) has arrived in Taiwan for a week-long visit to celebrate 50 years of diplomatic relations between the two countries – a journey not lost on officials in the People’s Republic of China, since eSwatini is the last African nation to maintain its diplomatic relations with Taipei.

The king will meet with President Tsai Ing-wen, and witness an economic agreement between the two countries, according to Taiwan’s Ministry of Foreign Affairs. He also will attend a banquet hosted by the foreign minister and meet with Taiwan’s business community to discuss investment.

The southern African nation remains steadfast in its commitment to diplomatic relations with Taiwan, despite pressure by the Chinese government. With the recent announcement that Burkina Faso has aligned with Beijing, eSwatini is alone in maintaining its ties with Taipei.

Tsai Ing-wen recently said her country will not compete with China on the basis of its “checkbook diplomacy,” a remark that drew the ire of officials who called it a baseless slander while praising Burkina Faso’s decision to align with Beijing.

“We have been sending out a very clear message in recent days,” said Hua Chunying, a spokeswoman for China’s Ministry of Foreign Affairs last week, on eSwatini. “As you can see, more and more countries have developed across-the-board friendly cooperative relations with China on the basis of the one-China principle and achieved tangible progress. Swaziland is surely welcome to join the big family of China-Africa cooperation at an early date so that we can take a group photo of the whole family of China-Africa cooperation. Indeed, this all depends on Swaziland itself.”