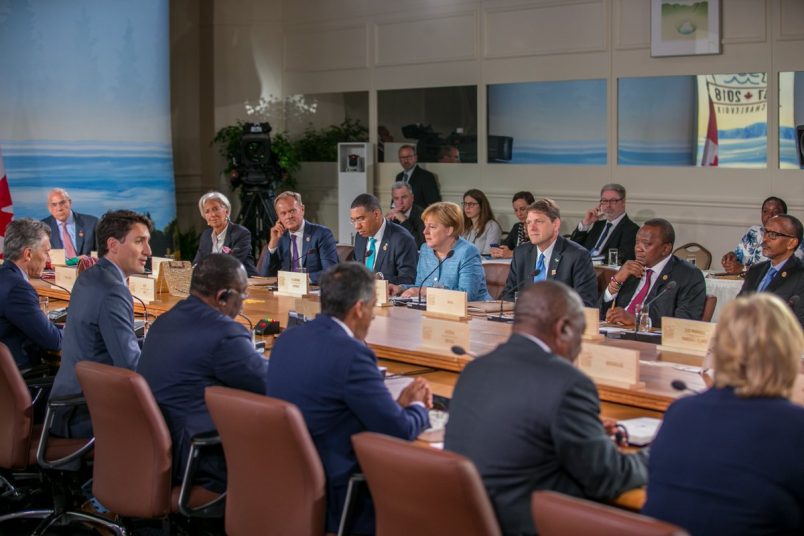 With all of the attention paid to United States President Donald Trump’s tirades on trade during the weekend G7 meeting in Canada, it might go unnoticed that a number of African heads of state were in Quebec too – and they were focused on environment and climate in a G7 outreach meeting dedicated to the world’s oceans.

Trump left Charlevoix early, headed to Singapore. Among other developments in the standoff over U.S. tariffs, he refused to sign a joint communique that reaffirmed commitment to the Paris Agreement on climate, and the shared resolve to embrace strategies to reduce carbon emissions and boost sustainable economic development.

In the end, a separate paragraph focused on the U.S. perspective and the continued use of fossil fuels – and Trump withdrew his endorsement of the document issues with a message, as is so often the case, on Twitter. Chancellor Angela Merkel told German media that Trump’s decision was “sobering and a little depressing.”

Canadian Prime Minister Justin Trudeau was specifically targeted by Trump, who kept up the attack on Monday morning ahead of critical negotiations with North Korean leader Kim Jong Un. A restrained Trudeau said Trump’s response was insulting, while the other partners — Germany, France, Japan, Canada, the UK and Italy – remain united in their sense of shared global responsibility.

The G7 commitment on climate and oceans

That unity was more than evident in their statement on climate and the view toward COP24 in Poland in December. “We discussed the key role of energy transitions through the development of market based clean energy technologies and the importance of carbon pricing,” the communique said, noting the importance of tech innovation, collaboration and finance to protect both environment and economy.

“We reaffirm the commitment that we have made to our citizens to reduce air and water pollution and our greenhouse gas emissions to reach a global carbon-neutral economy over the course of the second half of the century.”

Also in their message was a unified approach in endorsing the G7 charter on ocean plastics, and the Charlevoix Blueprint for Healthy Oceans, Seas and Resilient Coastal Communities. The blueprint makes adaptation planning a priority, along with financing for improved coastal resilience, improved methods and sharing of science and research, and mechanisms to protect sustainable fishing.

“Healthy oceans and seas directly support the livelihoods, food security and economic prosperity of billions of people,” the communique acknowledged. The G7 leaders met with their counterparts from 12 island or coastal countries – along with the United Nations, World Bank and other entities – to discuss concrete steps to protect marine biodiversity and environments, and the sustainable use of resources.

That group included President Uhuru Kenyatta of Kenya, President Paul Kagame of Rwanda and head of the African Union, and other leaders in their discussions on the “blue economy.” Kenya will in November host a global conference on oceans and sustainable growth that is co-hosted by Canada and Trudeau. 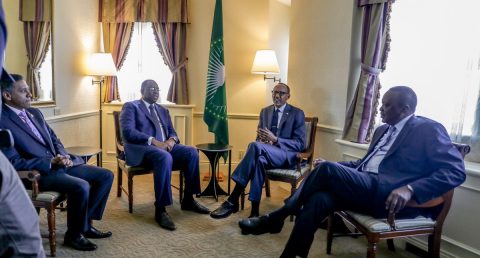 Kenyatta addressed the outreach session in Charlevoix on Saturday, and said that Kenya’s marine logistics and fisheries sector could add billions of dollars to his nation’s economy if harnessed properly. Yet it faces global threats common to Bangladesh, Caribbean nations, the Marshall Islands and Vietnam.

“Your political will and decisive action are vital to driving this agenda,” Kenyatta told the G7 meeting, emphasizing the need for partnership in tackling plastic pollution and illegal, unreported and unregulated (IUU) fishing that harms Kenya and other African economies.

“The Western Indian Ocean comprising Comoros, Kenya, Madagascar, Mauritius, Mozambique, Seychelles, Somalia and Tanzania has rich marine resources that attract about 500 commercial fishing vessels from around the world, mainly to catch tuna for consumption in the West,” Kenyatta said. “However, one of every five fish are caught illegally.”

“The issue of ocean conservation is paramount for Senegal,” said Sall in a social media message. “The G7 Charlevoix Summit on this theme is an opportunity to present our experience in the preservation of fisheries resources.”

Ramaphosa noted that the Charlevoix Blueprint is aligned with South Africa’s own Operation Phakisa, an accelerated economic development plan that turns to the sea to create jobs and simulate growth – but in turn, relies on the health of earth’s oceans to implement. There are six components to South Africa’s plan, including development of marine protected areas, aquaculture, and sustainable tourism.

For his part, Faure had the distinction of sharing Seychelles’ innovative approach to financing the blue economy through a debt swap agreement that allows it to designate some 410,000 square kilometers of its territory as marine protected area by 2022. About 200,000 of them are already under protection.

“As we sail towards a sustainable blue economy anchored in a healthy ocean, we have learnt that it requires a change in mindset,” Faure said, stressing that the ocean is his nation’s pathway to prosperity.

“Islands can no longer afford to see ourselves as dots lost in a sea of blue,” he said. “We are sentinels, the guardians of two-thirds of our Blue Planet’s surface. We must act accordingly.”

The African leaders and their Western counterparts – with or without Trump – intend to do just that. To learn more about the Blue Economy Conference in Nairobi, see this link.