Home>News>Machar, Odinga meet in Pretoria as South Sudan talks edge forward
By AT editor - 10 June 2018 at 5:57 am 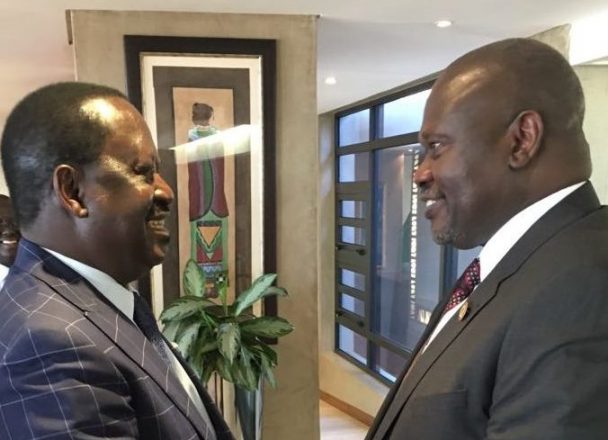 “I have had a fruitful discussion with Hon. Raila Odinga in the quest for peace in our country,” said Machar in a social media message on Friday, adding that both he and the SPLA-IO opposition he leads have advocated for a peaceful resolution to the conflict.

“The status quo shouldn’t stand,” Machar added. “Something will change.”

That change has proved elusive, as South Sudan remains caught in the grip of its civil war and regional Intergovernmental Authority on Development (IGAD) leaders have been unsuccessful in negotiating peace or enforcing a December 2017 ceasefire agreement.

There’s cause to be optimistic, as the Kenyan envoy Odinga – making peace himself at home after the bitterness of the 2017 election won by President Uhuru Kenyatta – has met with favorable responses from both Machar and Kiir, who he visited previously.

Meanwhile, Sudan’s foreign ministry announced that Kiir has agreed to meet Machar in Khartoum, but no date was announced, according to a report from the East African on Thursday. Kiir has insisted that any talks with Machar need to be within the context of the IGAD process, which includes a June 30 deadline for talks between the South Sudanese rivals so that they occur before the African Union summit in Mauritania at the beginning of July.