Home>News>New experts arrive in Mayotte to assess quake-swarm damage
By AT editor - 10 June 2018 at 8:35 pm 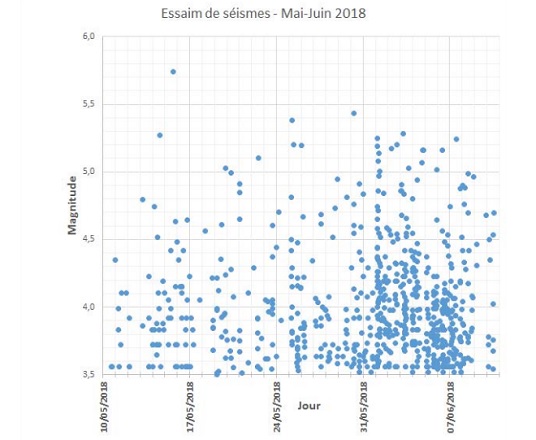 The weeks-long earthquake swarm in Mayotte continues, as a new team of seismic experts arrives Monday to begin estimates on the vulnerability of buildings and assess the level of damage on the Indian Ocean island nation.

The French territory is home to about a quarter million people, historically and culturally tied to the neighboring Comoros, and sits between Madagascar and Mozambique on the African mainland. Since May 10 – a full month ago – the island has dealt with hundreds of earthquakes.  The most significant was a 5.8-magnitude quake on May 15, the largest ever recorded in the archipelago that includes Mayotte.

A new summary is issued each day by BRGM Mayotte – the France-based geological agency serving the territory – and the island’s local government. For the 24-hour period ending at 5 p.m. Sunday, there were six quakes of magnitude-4.0 or greater, with a total of three dozen that were shaking the islanders.

While there have been no reports of serious injury or fatality, some buildings including a school in Dembeni have sustained damage. Mahorans were encouraged in recent days to assess cracks in their buildings and instructed on how to do so safely. They’ve also focused on preparedness and response.

Dominique Sorain, the prefect for the island, asked for expert assistance two weeks ago and an initial team arrived in Mayotte on June 1. Following their recommendations, France’s multi-agency Group of Macroseismic Intervention (GIM) team will spend this week evaluating the impact of all those jolts.

The seismic swarm is a succession of earthquakes that occur in a given place over a period of days or weeks, rather than one event, BRGM explains. The territory does not have a history of large or frequent quakes, and a 5.2-magnitude event in 1993 previously was the strongest recorded in at least 60 years. No destructive earthquake greater than a 6.0 is recorded at the island.

Mayotte is the oldest volcanic island in the Comoros Basin grouping, BRGM said, and quakes likely are the result of seismic hot spot as well as the island’s position along the East African rift.