Home>News>Migrants aboard Aquarius still wait for solution to Italy port crisis
By AT editor - 12 June 2018 at 7:01 am 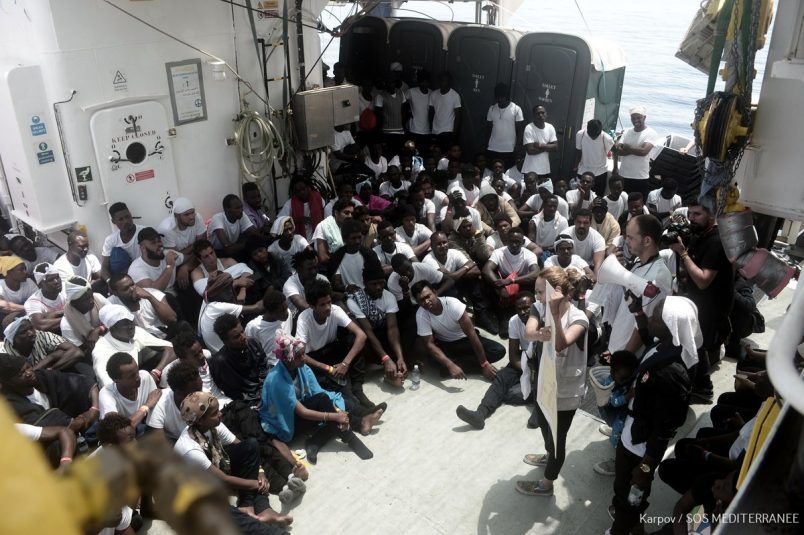 Aid workers on the Mediterranean Sea, with more than 600 migrants from Libya aboard the rescue ship Aquarius, continued to search for a solution after Italy refused to accept the ship in one of its ports.

The ship, operated by Sos Méditerranée with a medical crew from Doctors Without Borders (MSF), and its predecessor vessels have saved thousands of migrants at sea since Italy shut down its Mare Nostrum response service in 2015. However, Interior Minister Matteo Salvini, newly appointed in Italy’s anti-immigration government, has moved swiftly on the country’s border issues and warned last week during a visit to an Italian port city that the “party is over” for migrants who arrive by boat to Italy.

His refusal to accept the Aquarius has drawn international attention, as Malta shipped supplies to the stranded passengers but would not accept them at Valletta. Spain offered to accept the Gibraltar-flagged NGO ship, and MSF said it welcomed the Valencia offer but that meant four more days at sea for 629 people, more than 100 of them children. Nonetheless, it appeared likely the migrants would head for Spain.

The Aquarius remained at sea between Malta and Sicily at 7 a.m. Tuesday morning. The Nos Aries, an Italian supply vessel, was nearby according to tracking systems, but it was not clear if it was assisting the Aquarius. Euronews reported that supplies from the Italian Coast Guard were en route to the Aquarius.

Italy’s maritime rescue center appealed to the German NGO Sea Watch, which provides similar aid services, to see if they can accept some of the desperate migrants aboard the overcrowded Aquarius. Sea Watch was willing to assist, but insisted the migrants go to an Italian port.

“It doesn’t make much difference if the ship is called Aquarius or Sea Watch,” Salvini told the Ansa news agency.  “We want to put an end to this traffic of human beings. And so as we did for Aquarius we will raise the problem for the other ships,” he added, suggesting that all migrant ships will be turned away.

The United Nations refugee agency on Monday appealed for a resolution to the crisis. “There is an urgent humanitarian imperative here,” said Vincent Cochetel, UNHCR’s Special Envoy for the Central Mediterranean. “People are in distress, are running out of provisions and need help quickly. Broader issues such as who has responsibility and how these responsibilities can best be shared between states should be looked at later.”