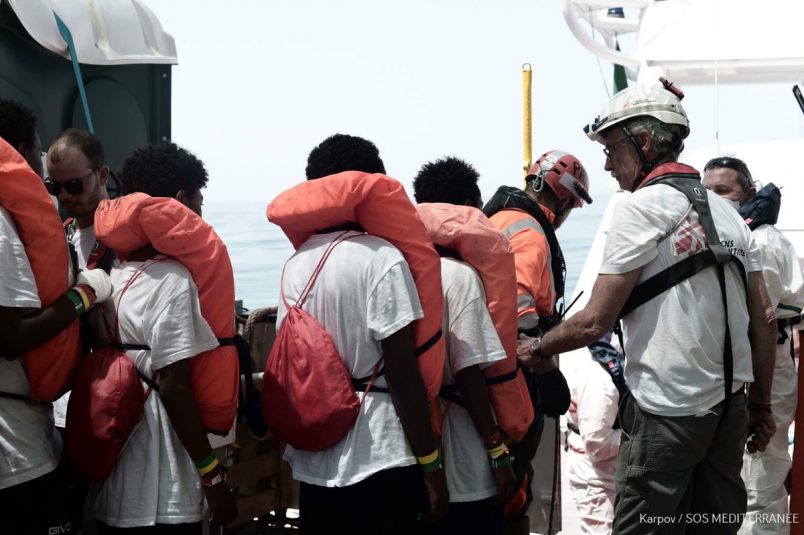 Migrants aboard a Mediterranean Sea rescue ship denied entry to Italian ports set sail for Spain at 9 p.m. local time Tuesday night, according to the Sos Méditerranée NGO that operates the ship in collaboration with Doctors Without Borders (MSF).

Their departure alongside two Italian military vessels ended a two-day standoff with the Italian government, which refused to accept the ship from Libya in any of its ports. That stance came as Interior Minister Matteo Salvini, newly appointed in Italy’s anti-immigration government, said his country’s cooperation in accepting migrants at sea was over – a position that drew the ire of Spain, France and other countries and international agencies.

“Finally, an end in sight to the ordeal suffered by 629 traumatized and exhausted survivors onboard Aquarius,” said Karline Kleijer, the emergency coordinator for MSF. “This standoff shows how Europe has lost its moral compass in the Mediterranean.”

The migrants aboard the Aquarius were divided across the three vessels, with MSF noting that ironically, it was the Italian navy and coast guard that brought 400 of the migrants to them in the first place.

Spain offered to accept the Gibraltar-flagged NGO ship, and MSF welcomed the Valencia port offer though reluctantly, because of the precedent the Italian government was setting. They also objected to the reduced search and rescue capacity for other emergencies as the Aquarius remained tied up.

“It is our obligation to provide these 600 people a safe harbor,” said Pedro Sánchez, the new prime minister of Spain. “We comply with international commitments regarding humanitarian emergencies.”

The United Nations refugee agency on Monday appealed for a resolution to the crisis. “There is an urgent humanitarian imperative here,” said Vincent Cochetel, UNHCR’s Special Envoy for the Central Mediterranean. “People are in distress, are running out of provisions and need help quickly. Broader issues such as who has responsibility and how these responsibilities can best be shared between states should be looked at later.”