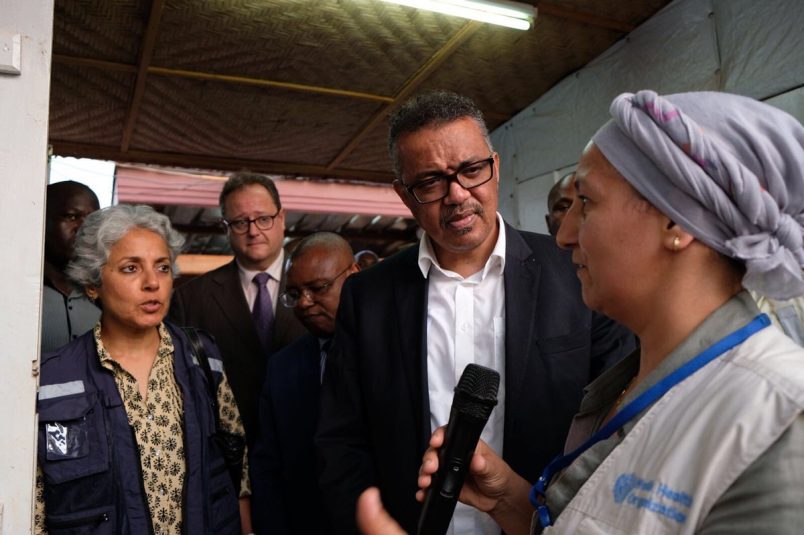 Tedros Adhanom, the World Health Organization Director General, returned to visit the Democratic Republic of Congo on Monday to check on the progress of Ebola treatment and containment. He then visited Central African Republic, one of nine neighboring countries taking preparedness measures.

“We have made great progress in the fight against Ebola, but it’s too early to declare victory,” said Tedros. “We must remain vigilant and continue to strengthen surveillance to stop the outbreak.”

In addition to medical care, teams have been providing public education to communities. Congolese health minister Dr. Oly Ilunga also held a conference call with his counterparts from the C.A.R. and Congo Brazzaville on Tuesday, to discuss Kinshasa’s experience so far, and plan cross-border collaboration and training in outbreak response.

Ilunga said four new suspected cases of Ebola virus infection are reported in DR Congo, as the nation continues efforts to manage an outbreak declared on May 9.

Ilunga said the new suspected cases were found in Bikoro, Iboko and Wantaga, all in the country’s northwest.  The cases bring the total number of Ebola victims to 59, including 38 confirmed cases, 14 probable and 7 suspected; any negative tests are removed from the ministry’s daily reports.

At least 28 people have died since the outbreak was first reported, while at least 10 people have survived the illness and been released from treatment. The number of people vaccinated has reached 2,507, the Congolese health ministry said.