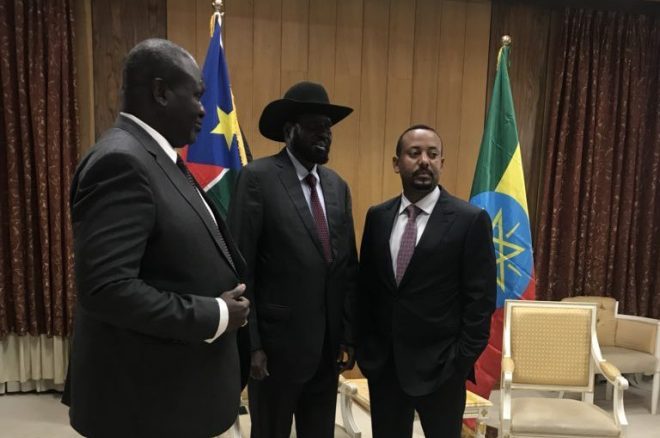 The long-awaited meeting between President Salva Kiir of South Sudan and his exiled rival, Riek Machar, appeared to go well on Wednesday but few details have yet been released about the substance of their talks.

Kiir and Machar, the former vice president who broke away from the administration and formed the opposition SPLM-IO, met for the first time in two years in Addis Ababa for talks hosted by Ethiopian Prime Minister Abiy Ahmed.

Their meeting comes ahead of a June 30 deadline for talks between the South Sudanese rivals so that they occur before the African Union summit in Mauritania at the beginning of July.

Meanwhile, South Sudan has remained caught in the grip of a civil war sparked by the split between the two in 2013. Regional leaders of the Intergovernmental Authority on Development (IGAD), which includes Ethiopia, have been unsuccessful in negotiating peace or enforcing a December 2017 ceasefire agreement.

Both Machar and Kiir have said they’re optimistic about the negotiations, with Machar telling Ethiopian Foreign Minister Workneh Gebeyehu that he and his party are ready to bring about peace in South Sudan.

Workneh noted that as part of IGAD’s efforts to revitalize the peace process, the face-to-face talk between Kiir and Machar are “an important milestone” that takes the negotiations to a higher level.

“We are, to a great extent, encouraged by the progress we have witnessed over the past one year,” the Ethiopian minister said in a statement.

The leaders of IGAD member states also are arriving in Ethiopia on Thursday to participate in an Extraordinary IGAD Summit.