Home>Commentary>Faraba Banta fatalities a reminder of The Gambia's fragile transition
By Laureen Fagan - 23 June 2018 at 12:47 am 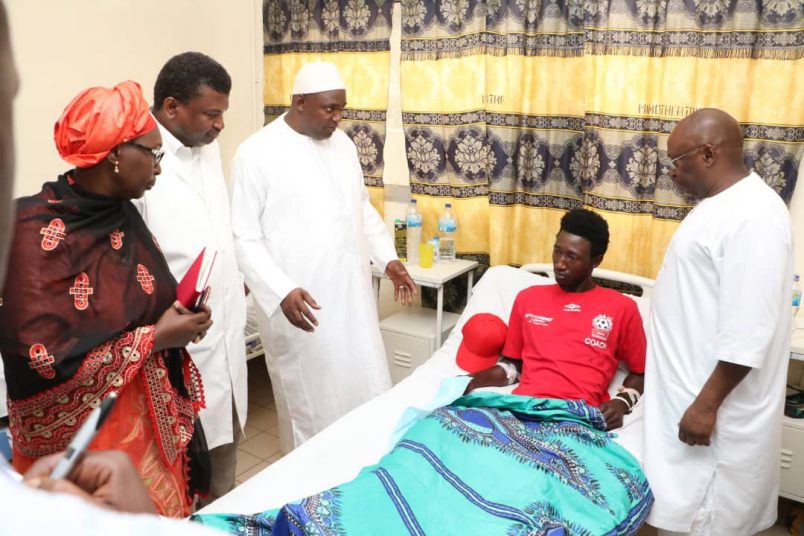 Monday was the saddest day of his presidency, said Adama Barrow of The Gambia, after three people were killed by security forces while protesting the environmental impacts of a sand mining company near the village of Faraba Banta. The incident, which has led to the resignation of the country’s police inspector amid a full investigation, has struck a nerve in the small West African nation where former president Yahya Jammeh ruled with an iron fist and impunity for 22 years – and it has placed its progress on reforms under scrutiny.

“We cannot afford a repetition of what used to obtain in the new Gambia,” said Barrow, as he visited victims wounded by live fire and now recovering in a Banjul hospital. “The loss of lives has changed the whole game. However, it saddened me and I was completely disappointed in the attitude of the police who did not act professionally in handling the crisis.”

Bakary Kujabi, Amadou Njang Jawo and Ismaila Bah will be buried on Saturday, and the Faraba Banta community plans a new demonstration on Sunday – one that the village leaders say they don’t support.

“As a community, we are still in mourning. We have already endured enough carnage. Some of our youths are still hospitalized in critical condition, while some families have lost virtually everything in the ensuing disturbances,” said Alhagie Sanyang, the village chairman, in a statement issued Friday.

“Even though the organizers of the planned protest call it a peaceful exercise, it is our considered opinion and position that in a volatile situation like we are confronted with, there is a possibility that the demonstration can lead to unintended consequences.”

The Gambia in transition

That’s true of Faraba Banta, which has been left reeling from the violence that followed ongoing protests against the Julakay Engineering and Construction Company that operates the sand mine and its Jammeh-supporting owner.

The villagers say their rice crops and their health are compromised by pollution from the sand mining, which has been a controversial industry for decades and at the center of corruption investigations that have included Jammeh himself. The exiled leader owned sand mining interests and remains under United States sanctions after withdrawing at least USD$50 million in state funds before leaving Banjul.

Yet Sanyang’s statement might also be true of The Gambia itself, as Barrow and the nation of 2 million people envision a democratic future while grappling with a dark history and the process of reconciliation. What happened to environmental activists at Faraba Banta demonstrates the work yet to be done.

Gambian Minister of Justice Aboubacarr Tambadou, speaking in Brussels last month during a donor conference on Gambia, said the country’s reforms are meant to avoid any recurrence of the dictatorship from which it was released. Yet the reform process takes time, and Tambadou also has appealed for patience. The emphasis on good governance and parallel economic development is evident in the National Development Plan, introduced in January after a national dialogue process.

“The systematic breakdown of the country’s laws and institutions, the crisis in the economy, the need for national reconciliation to heal the wounds and divisions arising from decades of a brutal dictatorship, the rising frustration of all segments of society, but particularly so with the youth, all require immediate attention on the part of the new Government,” says the development plan, which runs through 2021.

That’s also the target deadline for having a fully operative Truth, Reconciliation, and Reparations Commission, one that’s been fast-tracked since December and poses its own implementation risks.

Challenges ahead for Barrow

In the meantime, the Faraba Banta protest – a visibly violent incident, and arguably emblematic of the Gambian challenge – is another wound the Barrow administration will have to overcome.

“The Monday incident undermines the laudable government reform processes, particularly the ongoing transitional justice process being conducted by the Truth Reconciliation and Reparation Commission (TRRC),” said the Gambian chapter of the West African Network for Peacebuilding. WANEP expressed concern that the incident “could mar public confidence on the entire process and outcome” within the broader peace and security of a nation in transition.

The Gambia, to be sure, is making great strides. Earlier this month, an 11-member review board to oversee changes to the 1997 Gambian constitution was sworn in. Yet the democratic transition remains fragile, and tensions between the Barrow government and remaining Jammeh supporters, particularly in the military, remain a concern. There are “hints of authoritarianism” in Barrow’s own approach, said African expert and analyst Alex Thurston, following the detention of a Gambian academic in January.

The economy, a strong migration driver because of high unemployment and a key campaign issue for Barrow, also remains fragile. The International Monetary Fund (IMF), completing a visit to Banjul in May, said The Gambia’s debt has risen to 130 percent of GDP, half of which is owed to external creditors. There are signs of recovery, with a higher growth rate at 3.5 percent and lower inflation, but finding the funds needed to rebuild the country – including the truth and reconciliation process – remain daunting.

“Gambia’s ongoing reforms have benefited from strong political will, national ownership, and enthusiastic regional and international backing,” the Africa Center for Strategic Studies said in an April assessment. “However, Gambia is still deeply divided.”

This week, on Barrow’s saddest day so far, Gambians are reminded of just how much is at stake.

Image: Government of The Gambia