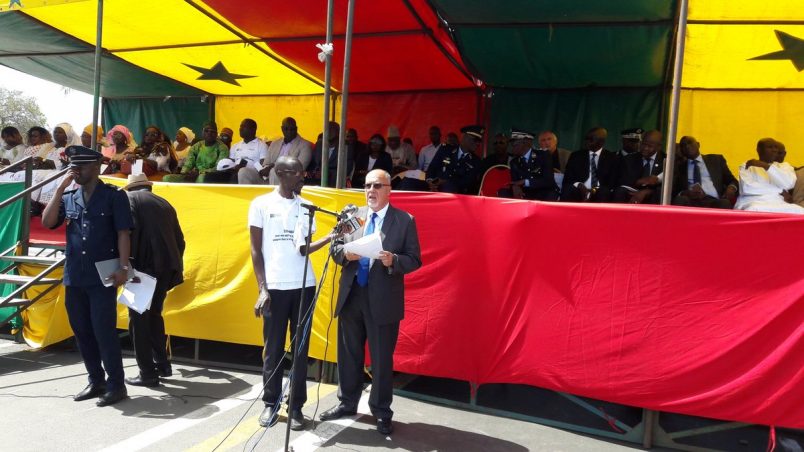 The annual World Drug Report was released Tuesday, and it points to continued Tramadol use and trafficking across central and western Africa as one of the most significant international problems.

“We need to raise the alarm about addiction to Tramadol, rates of which are soaring in parts of Africa,” said the report issued by the United Nations Office of Drugs and Crime (UNDOC). “The impact on vulnerable populations is cause for serious concern, putting pressure on already strained health-care systems.”

Abuse of Tramadol, a synthetic opioid, also has been reported in Egypt, Libya and other North African nations, according to the World Health Organization. It is easily accessed over the Internet and is not under international control, WHO said.

The drug, often compared to Fentanyl or morphine, is no longer under patent and is made by more than one pharmaceutical company, but it is more widely manufactured in illegal labs across the world, primarily Asia.

It’s been seen in Benin and Togo, has emerged as a public health issue in Ghana – where musicians and celebrities are engaged in fighting addiction – and is a crisis in parts of Nigeria, where its use has been associated with Boko Haram extremists.

Pierre Lapaque, the regional UNDOC representative for West Africa, marked the report release in conjunction with World Drug Day in Senegal. Speaking from Dakar, he appealed to governments to address the Tramadol crisis in their national plans.

In terms of drug interdiction, the focus for global seizures of pharmaceutical opioids is now firmly on countries in West and Central Africa and North Africa, which accounted for 87 per cent of the global total in 2016.

That total of pharmaceutical opioids including Tramadol also amounted to 87 tons, according to the report, making the seizures comparable to heroin in volume. There’s been attention paid to an impressive global spike in heroin production; for that matter, there’s also been considerable scrutiny of the pharmaceutical opioid crisis in the United States, which has led to an unprecedented decrease in life expectancy.

Yet less attention has been focused on the drug scourge in Africa. In May, the British medical journal The Lancet focused on Tramadol abuse in Togo, while following a 28-year-old motorbike repairman who takes twice the recommended dose of 400 mg per day to keep up with his customers. He’s been taking the drug as part of his morning routine for the past five years.

“And he is not the only one,” writes Laura Salm-Reifferscheidt, a scientist who is also a journalist and film producer. “Motorbike-taxi drivers, truck drivers, students, sex workers, and even farmers use it for non-medical purposes.”

The pills are cheap and readily available, and those suppliers in China and India have responded to demand by increasing the concentration in each pill. They’re then shipped to ports in West African nations – Cameroon and Côte d’Ivoire among them – before reaching illegal distribution networks.

Increasingly, that involves readily identifiable terrorist networks. Trafficking from the coastal hubs to Sahel regions often means transit controlled by armed groups including Islamic State in Libya and Boko Haram in Nigeria. Tramadol is used by both the Boko Haram fighters and the local vigilante groups trying to protect the community from them in Maiduguri, the long-besieged city in Nigeria’s far northeast.

“The problem is really huge,” says Marcus Ayuba, head of a unit run by Nigeria’s National Drug Law Enforcement Agency (NDLEA), in a June interview with the BBC. “It’s really huge.” He estimates that one in three youth in the region are addicted, a rate he attributes to a decade of war, trauma and poverty. Tramadol also may be preferred for cultural reasons, including the Muslim tenet that bans alcohol use.

Nigeria has stepped up enforcement and public education efforts, as have Ghana and other African nations. What many question, however, is the Tramadol classification that leaves it off the list of controlled substances regulated by the International Narcotics Control Board (INCB).

In part, that’s because it was believed to have low addictive potential while remaining valuable for medically legitimate pain relief. Ultimately, that means that unlike other widely used drugs such as Fentanyl, regulating the use of Tramadol is left to individual nations – and at African borders, the pills cross freely.

The problem isn’t new. Two years ago, the Wall Street Journal referenced the results of a study that looked at what seemed to be a naturally occurring Tramadol source in roots grown by traditional healers in Cameroon. Researchers at the University of Dortmund, however, came up with a different theory: There’s so much Tramadol used by herders, feeding it even to animals, that it seeped into the ground at concentrations absorbed by the plants.

It wasn’t until 1992 that the World Health Organization drug-control committee began to review the drug, and now – more than 25 years on – it is still not subject to international controls. Yet in 2000, and again in 2003, the WHO experts began raising the addiction and abuse alarm.

The INCB acknowledges in a 2018 report that it can be fatal when combined with alcohol and other medications, and echoes the December 2017 warning of the drug’s role in the destabilization of African nations issued by UNODC.  This latest UNODC report makes the same call for action on Tramadol, raising an alarm that keeps getting louder.