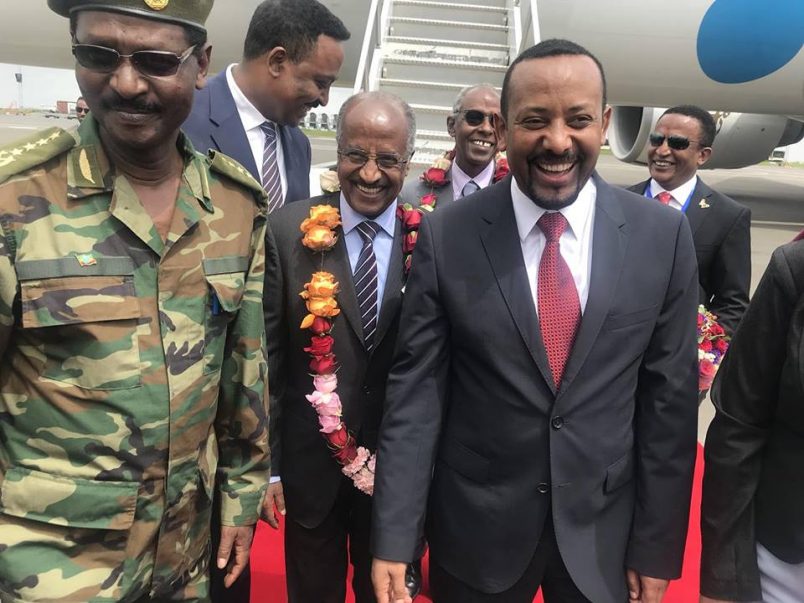 Both the Eritrean and Ethiopian governments confirmed early Sunday that Prime Minister Abiy Ahmed has left Addis Ababa to continue negotiations between the two nations long separated by a border dispute.

Yemane Meskel, the Eritrean information minister, said Abiy was expected to arrive in Asmara during the morning. “This historic official visit, and the summit that will take place between the two leaders of both countries, is the first of its kind for twenty years,” he added. “It heralds a new era of peace and cooperation.”

Meanwhile, Ethiopian Fitsum Arega, the chief of staff for Abiy’s office, confirmed that the prime minister had departed for Eritrea. His mission was expected to “further deepen efforts to bring about lasting peace between the people of Ethiopia and Eritrea,” he said. “Our two nations share a history and bond like no other. We can now overcome two decades of mistrust and move in a new direction.”

Ethiopian officials previously said Abiy planned to meet with Eritrean President Isaias Afwerki but did not offer specific details. Asmara, however, was abuzz with preparations for Abiy’s visit, with Ethiopian flags lining the streets and banners hung to welcome him by name.

The expectation of an Abiy-Afwerki meeting followed the reception of a high-level Eritrean delegation in Addis on June 26. The thaw between the two followed a decision by the reform-minded Abiy to accept the terms of the Algiers Agreement established in 2000, which requires Ethiopian troops to leave the town of Badme and surrounding disputed territory.

That ruling followed a two-year conflict in the ethnically and historically linked region, but was never implemented as Ethiopia balked at the findings of the Eritrea Ethiopia Boundary Commission (EEBC) that supported Eritrea’s claim to the land.