Home>CUTTING EDGE>Scientists in Botswana find rare fragments from asteroid impact
By AT editor - 9 July 2018 at 5:56 pm 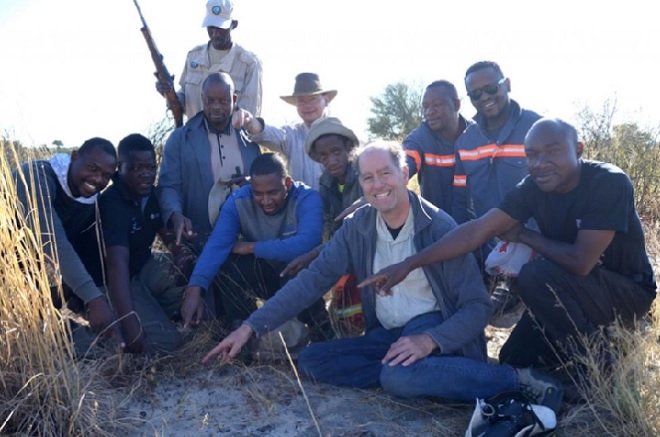 This is only the second time in history that a small asteroid observed in space was recovered following its impact on Earth, the SETI institute said in a statement shared by the Government of Botswana. The boulder-sized asteroid, 2018 LA, was spotted just hours before earth impact on June 2 and expected to burn up before striking. Although there was not enough tracking data to make precise predictions ahead of time, a swath of possible locations was calculated stretching from Southern Africa, across the Indian Ocean, and on to New Guinea. Reports of a bright fireball above Botswana matched up with the predicted trajectory.

“The biggest uncertainty we faced was to determine where exactly the meteorites fell,” said Peter Jenniskens, a senior researcher at the Carl Sagan Center of the SETI Institute and with NASA.

The Dutch-American astronomer teamed up with Oliver Moses of the University of Botswana’s Okavango Research Institute (ORI) and Tim Cooper of the Astronomical Society of Southern Africa, as well as scientists in Finland, to review security surveillance videos in the area where the fireball occurred. That gave them a better understanding of what areas to search to recover the pieces.

The first meteorite was found after five days of walking and scouring a landscape of sand, thick tall grass, shrubs and thorn bushes. “The challenge was to search for a meteorite in 200 square kilometers of uncharted wild in a park teeming with elephants, lions and snakes,” said Dr. Alexander Proyer of the University of Botswana, leader of the joint expedition.

“We see it as our mandate and duty to respond quickly to events like this one and to recover the material, both for research purposes and as part of the heritage of Botswana,” Proyer said.

Mohutsiwa Gabadirwe, senior curator of the Botswana Geoscience Institute, described the find as “a priceless piece of rock” to be displayed for generations to come.

You can learn more about the space rock discovery and the scientists at this SETI link.