Home>News>Buhari set to deliver ICC anniversary keynote in The Hague
By AT editor - 17 July 2018 at 5:18 am 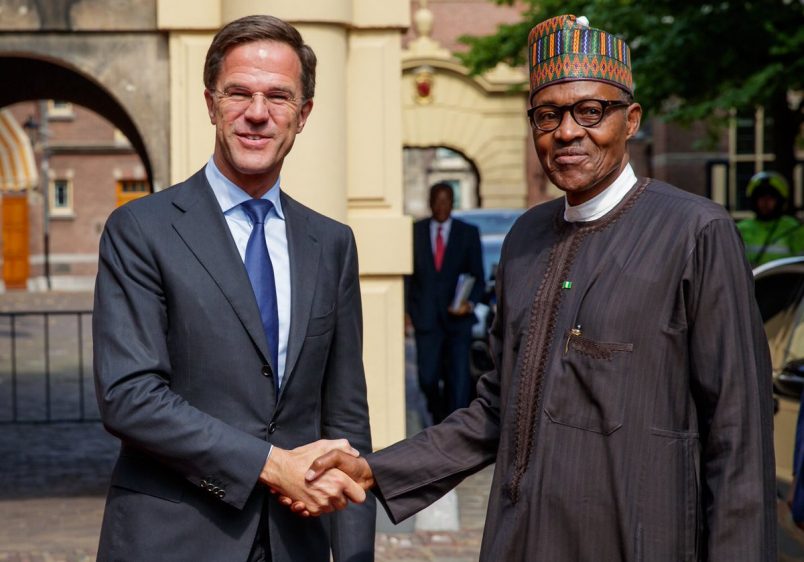 President Muhammadu Buhari will deliver a keynote speech Tuesday in The Hague as the International Criminal Court marks its 20th anniversary.

Buhari is the only African president to attend the invitation-only event, which will be broadcast live on the ICC website and Facebook.

“President Buhari will share his thoughts on the values and ideals of the Court, which was established to prevent impunity, and try cases of genocide, war crimes, aggression, and crimes against humanity,” said presidential adviser Femi Adesina in a statement.

Buhari will reaffirm Nigeria’s commitment to the Rome Statue that established the court – often a divisive issue among African leaders and governments – and plans to focus on corruption, an African Union priority and one that’s at the forefront in Nigeria.

Buhari also met with Dutch Prime Minister Mark Rutt, above, on Monday, and planned to attend a dinner hosted by Nigerian Judge Chile Eboe-Osuji, the President of the ICC.  A meeting with ICC Prosecutor Fatou Bensouda also was on the schedule, as well as roundtable discussions with Dutch CEOs who have business interests in Nigeria.

The commemoration is expected to highlight the ICC achievements with a special exhibit on “Trauma, healing and hope,” while allowing for reflection on the challenges of the future.

Global human rights organization FIDH, based in Paris, was among those marking the significance of the ICC milestone while expressing concern over states’ cooperation with the Court, inconsistencies in securing victims’ rights and other issues.