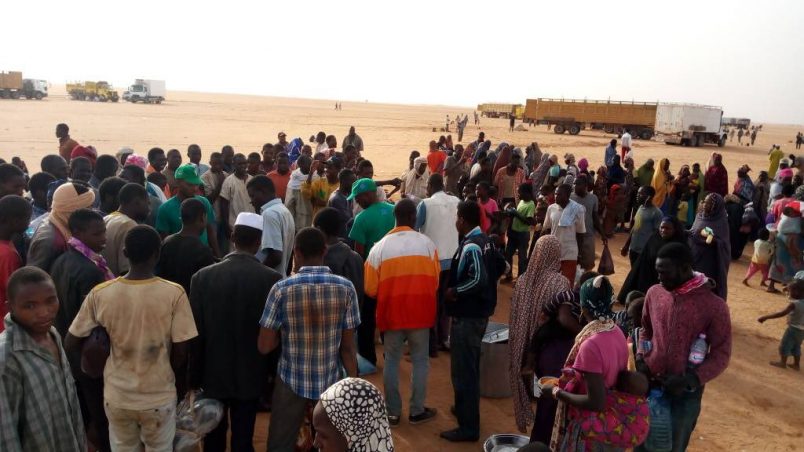 Hundreds of migrants rounded up in Algeria have arrived in Niger, despite the Algerian government’s strong denials that it is forcibly removing the primarily West African migrants and dumping them in the desert.

Migrants from Guinea, Cameroon and other nations tell the International Organization for Migration (IOM) that they are picked up in Algiers, Oran and other cities – often while headed to work – and taken to Tamanrasset. Trucks take them from there to In Guezzam at the southern border shared with Niger.

IOM officials in the remote desert outpost of Assamaka have described migrants emerging from the desert in the thousands. In the most recent such episode, two people died this week during the journey, according to Giuseppe Loprete, the chief officer for IOM in Niger.

“Extreme conditions,” said Loprete, describing the tragedy in the desert as migrants are stranded without adequate food or water, and with mobile phones confiscated.

It’s been nearly two months since the United Nations human rights agency called on the Algerian government to stop the practice of forcibly removing migrants and abandoning them to the elements, following a UN field investigation documenting the cases.

“Raids are reportedly carried out on construction sites in Algiers, as well as in neighborhoods known to be populated by the migrants. Some also reported having been stopped in the street and detained,” the UN’s Office of the High Commissioner for Human Rights said. A similar investigation was conducted by Human Rights Watch in April and May, which was widely reported by the international media.

“Algeria has the power to control its borders, but that doesn’t mean it can round up people based on the color of their skin and dump them in the desert, regardless of their legal status and without a shred of due process,” said Sarah Leah Whitson, Middle East and North Africa director at Human Rights Watch.